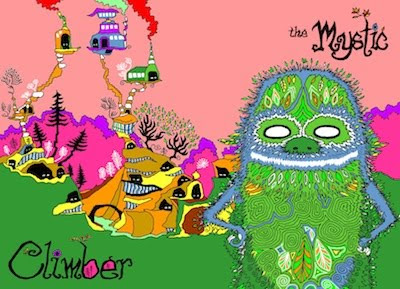 Growing up. It happens to us all. One morning you wake up and realize you’re getting old(er). You’re quickly approaching 30, you’ve got a wife, a house, a family, kids… and not the illegitimate, rock star kind. Gone are the days of packing up everything in van and touring the country. It’s time to reconsider what “making it” means to you.

But for Climber, “making it” means making music to please yourself. Making authentic music. And making the best music of their seven-year career.

On their third album in six years, Climber has finally found their sound with The Mystic. And it’s not one particular sound. Rather it’s an evolving soundscape of fresh experimentation full of layers that morph from rough Radiohead (“We Are the New Man”) to Muse-esque, piano-rocking balladry (“The Risk of the Middle Way”) to disconnected Menomena (“The Simians Speak”). Plus there’s the loving, meandering pop of their first single “I Have Seen Everything” (listen on here).

As they sing on the album’s second track “Stepping Into New Rooms”: “That thing isn’t giving me the thrill it used to.”

But Climber’s Michael Nelson (vocals, piano, Wurlitzer, organ, programming) has found something more substantial to give him and his band new thrills.

---
Read the complete interview on OMN.
Posted by pdxnoise at 10:30