omn reveals the angry orts as the final act at our free, first anniversary party 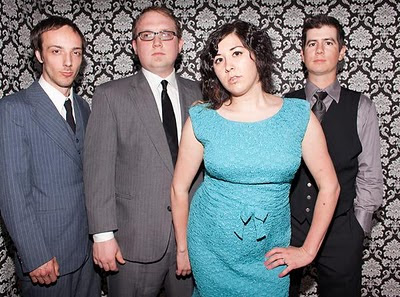 Oregon Music News is delighted to announce that the final act celebrating our first anniversary at The Secret Society Ballroom on Tuesday, October 26th will be Portland’s bouncing indie rock quartet The Angry Orts.

Pulsing with sexuality, the dance-y rock quartet is fronted by the deliciously demanding vocals of lead singer Sara Hernandez. Leading her boys into battle with a tambourine in hand and a don’t-mess-with-me swagger, the tight band of guitarist Aaron Ettlin, bassist James Puryear, and drummer Mathew Hernandez backs her already powerful presence. Part garage singed with a bit of surf and plenty of pop that really bops and rocks, the four play with the confidence and expert cohesiveness that is only earned by putting in their time together.

Earlier this year, The Orts were featured on the 2010 PDX Pop Now! compilation (as well as playing the CD release gig), released their self-titled second, album in August, and now they just finished up a West Coast tour at the beginning of this month, which saw OMN covering their stellar San Fran gig.

With a self-proclaimed sound of: “Hot sex. For your ears.” The Angry Orts will be closing out OMN’s First Anniversary at 9:30pm following sets from the PDX Jazz All-Star Jam with vocalist Kelley Shannon, pianist Dan Gaynor, bassist Sam Howard and drummer Carlton Jackson at 7:30pm and 3 Leg Torso at 8:30pm. Spinning in between bands will be Bhangra-Bollywood beat makers DJ Anjali & The Incredible Kid.

Come celebrate our birthday on October 26th. Invite your friends, there’ll be a no-host bar and snacks courtesy of The Secret Society (next to the Wonder Ballroom) and a raffle with a chance to win some great prizes and gift certificates.

There will be cake! And the party is free!