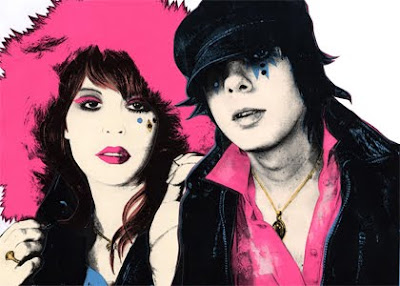 Glass Candy is an analog, Italo-disco freight train boring a hole right through the center of the world. For the past 11 years, they’ve been using this tunnel to jump from one side of the world to the other, transporting a plethora of limited edition vinyl and dark, atmospheric electro-pop.

A tireless work ethic has produced everything from the early noisy, glam disco punk of Glass Candy & The Shattered Theatre to today’s guitar-less, dulcet disco dance, always fronted by the breath of Ida No’s graceful exhalations and carried by the laboriously produced beats of Johnny Jewel.

For Johnny Jewel, it’s running his own record label–Italians Do It Better with Mike Simonetti–to producing a slew of albums, tracks, artwork, remixes, mixtapes and more with other artists and bands to working through 45 or so songs with Ida No for a new Glass Candy album titled Body Work–eventually out on Italians Do It Better when everything is just right–and the list goes on. It also took the Portland duo 11 years to release their first music video, which dropped this past spring.

Johnny Jewel and Ida No are so busy they don’t have time to conquer the world. It just happened.

As often happens, Glass Candy has been everywhere in the world, sadly away from gigging around PDX for the better part of this last year, but they still feel at home in our city. And when they come home, they like to throw a party. Like this Friday, October 1st at Rotture with friends Chromatics (one of Johnny Jewel’s other projects plus it’s their first PDX show in two years!), Mike Simonetti, and Vice Device. Show starts at 9pm, $8 at the door plus there are a limited number of tickets are available at 360 Vinyl and both Jackpot Records locations.

So when will the elusive Body Work finally be released? In the meantime Glass Candy has a few other treats to tide you over, plus Johnny Jewel as Thomas Magnum on his first vacation in 15 years.

---
Read the complete interview on OMN.