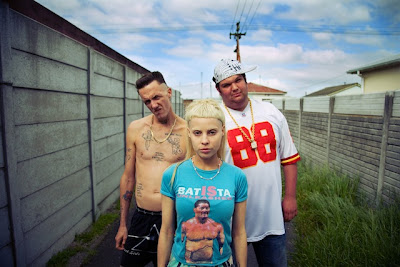 South African pop-culture doesn’t often make its way across the globe to the States but Cape Town’s Die Antwoord have quickly built a worldwide following. With more than 8 million YouTube views for their video “Enter The Ninja,” Die Antwoord visited North America for the first time as the first ever South African act to play Coachella and followed that up this summer with more North American dates, playing with two HARD dates with MIA in LA and NYC, before announcing a 13-date US tour for this fall.

Hitting Portland’s Crystal Ballroom on Thursday, October 14th, Die Antwoord has quickly taken hold of American audiences with their unmistakable brand of English/Afrikaans profane, rave rap. Afrikaans for The Answer, it’s hard to decipher what exactly the question was, but their popularity is evident when you take into consideration that MIA stops through Portland four days later at the Roseland, a venue of comparable size to the Crystal.

“Enter The Ninja” (above) samples the refrain from “Butterfly” (released by Smile.dk in 1998 but made famous by Dance Dance Revolution) and the video, released in 2009 by South African cinematographer Rob Malpage with Die Antwoord’s lead vocalist Ninja as the co-director, took nine months to gain any buzz but when it did, it blew up–instantly becoming an international viral phenomenon. Featuring Leon Botha, a prominent Cape Town artist and one of the world’s oldest survivors of progeria, it drew so much traffic worldwide to Die Antwoord’s official site that their hosting was disabled because of massive bandwidth overages, forcing the band to transfer to another, better equipped provider.

This sudden rise is also due to Die Antwoord’s antics. But do Die Antwoord represent a swath of modern, white South African society? They’re not so much a rap group as they are actors, adopting a coloured-Afrikaans-gangster-lower-class culture with sleek production and dirty (yet sometimes meaningful) ditties.