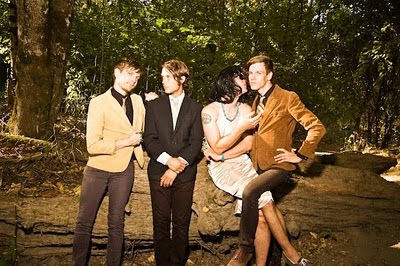 What thankfully remains true is that Portland’s most adored indie-electro-pop darlings Starfucker will be releasing their second album under their god-given, started-as-a-joke name after inking a deal with Polyvinyl Records’ West Coast office in San Francisco.

Yet, the latest press release from their new big box publicity company officially refers to the band as STRFKR (even misspelling the new abbreviated/acronymed moniker as STFKR in the title of the email… man those letters are difficult!). Although, it seems that Starfucker long ago accepted this fate when they reverted back to their original being, using the letter mash in for their current MySpace URL (myspace.com/strfkrmusic) and even allowing the family-friendly-spell-out-expletives-because-Johnny-is-too-young-to-understand-and-easily-fooled-by-comic-strip-cursing-#@$%!-approved Starf*cker.

Do you think all the past name changes have hurt Starfucker at all?

Succinctly and assuredly put: “No. It made it better,” says Ryan Biornstad.

Throughout it all, one thing has remained constant: the music. And the fact that Portland wants more of it. Playing their biggest gig to date at the Roseland Theater on Wednesday, October 20th, Starfucker has been co-headlining their current tour with the tight experimental pop of Austin’s The Octopus Project–traveling together and trading off nights as the closer depending on the city or whichever band ate the most cherry pies at lunch. Joining the tourmates are Portland disco-funk favorites Strength and indie-pop rockers Super XX Man.

OMN spoke to Ryan Biornstad on the phone from Washington DC when the band had just breached the two-week mark of their five-week tour and was heading to Philadelphia. Here’s the dish on Starfucker’s new album out in March (if they meet all their deadlines), a road diary of their creepy adventures, and a freshly “amped up” live show featuring tight new tracks off the new album. And you can bet your sweet ass that means new costumes!

Listen to the first single "Julius," available for purchase here...