Very much in love with this. The song (DJ Shadow featuring Little Dragon on "Scale It Back") and video concept (kudos to director/producers Ewan Jones Morris and Casey Raymond) are both brilliantly done, and now I'm watching on repeat.

Seems like the world can't get enough of the vocals of Little Dragon's Yukimi Nagano lately so here's another treat: SBTRKT featuring Little Dragon on "Wildfire," a track that could easily be another LD single if not for the added post-dubstep sounds of South London.

Posted by pdxnoise at 14:01 No comments:

Am impressed and enjoying the math-y, complex rhythms of No Kind of Rider's new track/live video for "Savage Coasts," which emanates a palpable UK vibe (Bloc Party, Foals). Plus stream the whole Mississippi Studios set from earlier this month on AudioGlobe.

Check out the Portland five-piece's most recent EP, Away Colors, below and purchase it on Bandcamp.

Email ThisBlogThis!Share to TwitterShare to FacebookShare to Pinterest
Labels: no kind of rider, video, watch 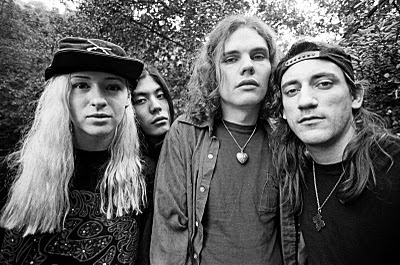 My love/hate relationship with The Smashing Pumpkins has been reignited. By this account of Courtney Love. In Brazil. Last Sunday.

Before another epic tirade devolved into commanding the crowd to chant "the Foo Fighters are gay," apparently Love

"claimed she was the inspiration for almost everything on the Smashing Pumpkins' landmark mid-'90s albums Siamese Dream and Mellon Collie and the Infinite Sadness. She even took credit for the key lyric on SPs hit 'Disarm,' saying she wrote the line 'The killer in me is the killer in you' in a letter to Billy Corgan."

Somewhere been repulsion and amusement, I found myself on The New Smashing Pumpkins' Facebook page, unconsciously listening to sunnier SP tracks from the baby talk titled Teargarden by Kaleidyscope.

Now, Billy Corgan is not without his own absurd antics (forays into pro wrestling, the control freak causing band drama, allegedly "dating" (or aspiring to snog) Jessica Simpson, etc.), but it had been years since I'd personally pressed play on a Pumpkins song, apparently seeking that unmistakable, shrill whine. And even though Billy Corgan tried his damnedest, I had a hard time letting go of the Pumpkins the first time around. 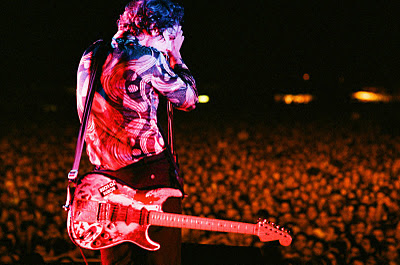 Through the Machina years and the slow demise of the band, as original members left or faded out of the picture, I still looked forward to the future, holding Corgan in high esteem--at least, I was anticipating what was next.

Believing the glass was still half full, I reveled in the fact that Corgan contributed to New Order's comeback album Get Ready and was overjoyed to find out he'd be filling in for Gillian Gilbert on Moby's inaugural Area:One Festival (the second would be the last) when it came to the Gorge--a trip that was a first (and only) for many things: New Order, the Gorge Amphitheatre, The Roots, OutKast (only). A SP-emblazoned guitar pick that Corgan flicked into the audience was a prized trophy, forever framed alongside a piece of Moby's t-shirt in my childhood bedroom.

I embraced Zwan and even regularly listened to both Billy's and Jimmy Chamberlin's 2005 solo records. But the thought that the band would reunite five years later under the same name with just two original members stretched my sentimentalism a bit thin. I stopped paying attention and failed to get into Zeitgeist. I had given up on the band--or what was left of it.

Then things only got more ridiculous when it was announced that a 19-year-old kid from Beaverton was going to be the band's new drummer in the absence of Jimmy Chamberlain. From the outside, it always felt like Billy broke the band up. It seemed that the things that made him a great musician and frontman made him a terrible compatriot in close quarters. And yeah, it may have been his band to break up and then "reunite," but the rest of us, and maybe some former bandmates, cared about that band too. (Teenage Pumpkins devotee speaking here.)

So, at that point I did something that my former self would've thought unfathomable. The next time the Pumpkins came to town for MFNW 2010 (playing what would've been an intimate show at the Wonder), I chose to watch Menomena--who would soon shed their original lineup too--instead. 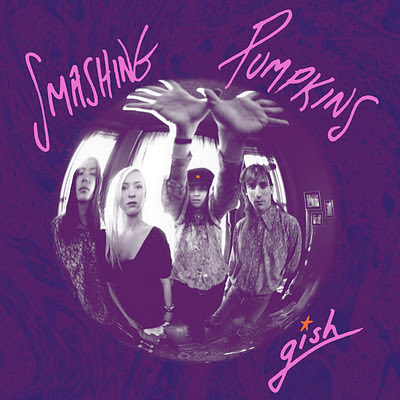 And now we're finally to the point of this post. The Smashing Pumpkins are reissuing their first two albums, Gish and Siamese Dream, in a package that includes tons of unreleased rarities and two DVDs of period performances--we're talking hometown Metro gigs in Chicago from 1990 and '93--out November 29th via EMI.

My indifference might've allowed me to gloss over these releases except I also stumbled across four streams--four previously unreleased demos from the upcoming reissues including "I Am One (Reel Time Demo/2011 Mix)," "Rocket" (Rehearsal Demo)," "Today (Broadway Rehearsal Demo)" and "Disarm (Acoustic Mix)"--posted on Seattle's 107.7 FM The End, which of course have now been taken down.

But hearing those old originals roused something within me, made me remember the band I once loved. So I got on the horn (email) and demanded my copies, which should be on my doorstep ASAP. And I'm once again excited to listen to The Smashing Pumpkins.

I've still yet to like that Pumpkins page on Facebook although I've been back to listen to the tracks--more for background noise than due to any deep attraction to the music. (Besides, these freebies are better.) The voice is the same, so maybe the songs are growing on me?

I guess I'm open to the risk.

Posted by pdxnoise at 18:23 No comments: 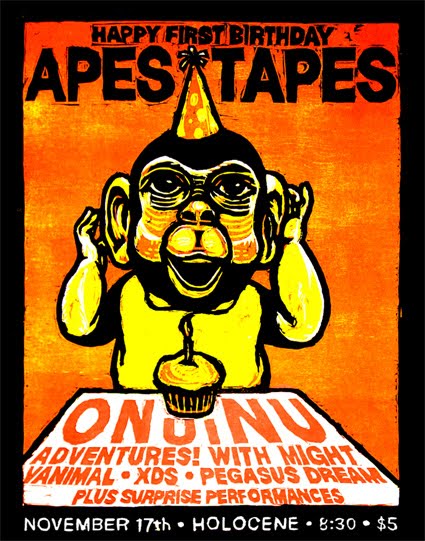 Cassette tapes championed by local tape labels have helped the industry-obsolete format make a resurgence around Portland over the last several years.

Although the anti-digital, pro-physical format may lack the quality, fidelity and longevity of vinyl or digital incarnations, it retains a portability and an idiosyncratic classicism as the diminutive, teethed spools move tape from reel-to-reel in a ritual manner. Not quite vintage at this date, but retro in some circles, tapes still brim with nostalgia for all those children of the '80s and early '90s when the mixtape was the same format that ignited gangsta rap careers, catapulted DJs from the streets to clubs to MTV, and may have won over Molly Ringwald in your dreams, or even your real life sweetie, with the perfect mix. Plus, these days all that minuscule magnetic tape can come housed in quiet the variety of neon colors.

As of late, it's been a conscious choice for Portlanders to establish record labels that serve as manufacturers and distributors of tape-recorded music, and one of the rising players in the current scene, mostly due to their curation and connections, has been Apes Tapes.

One year old this fall, Apes Tapes will celebrate their first birthday and the release of Mixed Ape 3 (a 16-song compilation tape, also available digitally, that features cuts from the below performers as well as Aan, And And And, Support Force, Youth, Rico All The Time and more) at Holocene on Thursday, November 17th with Onuinu, Adventures! With Might, Vanimal (reunion performance), XDS, and Pegasus Dream. Plus there will be a surprise DJ and three surprise, guerrilla mini-sets from specials guests--one of which we can reveal: DoublePlusGood!

"Continually exploring what it is to be an artist and an artist-run label, walking the fine line between musician and businessperson, maximizing quality and quantity, often with little-to-no money, the label is as much a project as the music itself. It is the epitome of the DIY Portland music scene, and that’s what makes Apes Tapes important."

OMN spoke with Apes Tapes founder Cameron Spies (also of Radiation City) about the label's history and future and caught up with a few of the bands featured on Mixed Ape 3 plus performing at Holocene to answer some questions on their involvement as well. But before that, watch Onuinu's "Ice Palace" directed by Andrew Sloan:

---
Read interviews with Apes Tapes' Cameron Spies and the performers on OMN.

Posted by pdxnoise at 11:00 No comments: 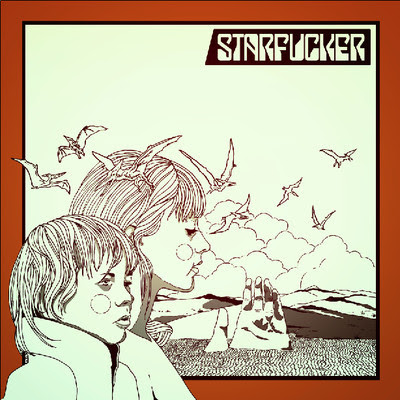 Over the last few days, Starfucker has dropped a couple treats on us via Soundcloud and Facebook in the form of demos from the Reptilians recording sessions.

In a Facebook post, the band said, “We’re thinking about releasing all of the Reptilians Demos as a 12-inch vinyl someday… that’s even the Demo Artwork!! >>this is what ‘Julius’ used to sound like…”

Here are the four other tracks they’ve shared so far: “Astoria,” “Bury Us Alive,” “The White of Noon,” and “Mystery Cloud”

The expanded line up heads over to Europe in ten days for 20+ dates in November and December before playing an NYE show in Seattle and heading south to Cali and then the South. Sorry, no PDX/ORE show for now. Complete dates here.

Posted by pdxnoise at 12:07 No comments: 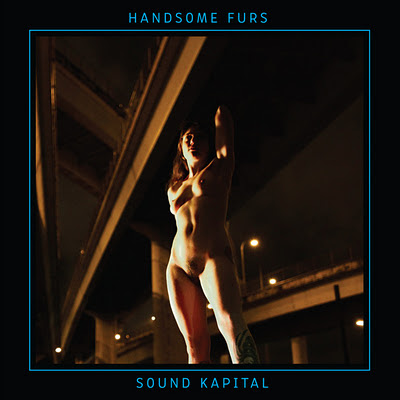 If you look closely, you may recognize that these Montrealers (or if Québécois you're trying to sound fancy) have been around Portland. The husband and wife duo of Handsome Furs have a PDX connection in the form of director/actor (Mulholland Drive, Inland Empire) Scott Coffey, who directed the NSFW video for the single "What About Us," as well as the past Wolf Parade video "Yulia."

"What About Us" is sexually fueled and dark, full of despondent lust in hotel rooms, psychotic drivers, and voyeurs in the gloom spying frontal nudity from both genders. Coffey said, "It was all shot in Portland, Oregon in the cold and rain. But that’s good for nipple boners."

Maybe you'll recognize the MAX line, your room at the Palms, or the descending underbelly of the Fremont Bridge like a concrete maze above your head.

Plus get "Repatriated," the second single from Sound Kapital:

Or download both via this handy Sub Pop widget:

Posted by pdxnoise at 17:39 No comments: