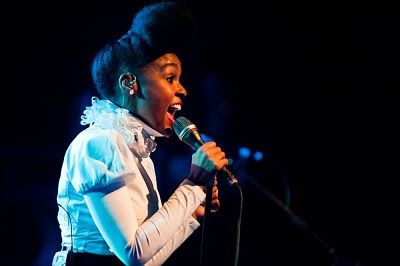 “You will dance or die!” announced the The ArchAndroid Janelle Monáe, her massive golden face glowing from two video screens behind her dapper band. Addressing Portland from the year 2719, the messiah android told that contrary to popularly held fears robots and humans of the future could live together in harmony. But the atmosphere quickly turned to a more primitive state. Aboriginal faces emblazoned the same screens as rapper-poet Saul William’s recorded voice set off the aforementioned “Dance Or Die.” Backs to the audience, three cloaked druid figures bobbed their conical protrusions before one revealed her face.

Throwing off her cape on Thursday night opening for of Montreal, Janelle Monáe strutted forward to tell a robo-tale and the Roseland screamed. Puffed white shoulders and an Elizabethan ruff around her neck, the girl rearranged the acts of Suites II and III from her debut studio album The ArchAndroid to a share the fictional story of a messianic android, Cindi Mayweather, a concept which is adapted from and influenced by the 1927 German-expressionist film Metropolis, as her 2007 EP was titled as such: Metropolis: Suite I (The Chase).

With her incredible afro jutting out front and drawing attention to the whites of her wide eyes, the tiny android diva commanded alone with presence and performance but shattered minds with her pipes. From soulful ballads that enraptured to impenetrable raps, Janelle Monáe’s set was seamless and theatrical complete with a Halloween vibe and costumed back up dancers–from the living dead stalking about in white-beaked, Venetian Medico Della Peste masks on “Sincerely, Jane” with arms extended to the lyrics “Are we really living or just walking dead now?” to her two girls in nun-like smocks.

Janelle Monáe’s expressions were deadpan robotic and serious while her saddle shoed moves were so perfect that they could have only been preprogrammed. From ballerina-esque poses to jittering possessed, she maintained a fluid elegance as she put her knee up and slithered deftly across the stage. The biggest shame was that most of audience on the floor could not she those toes tap. The woman needed, and deserved, a pedestal.

The show flowed continuously, telling her story as instrumental ludes from her talented boys filled the gaps between songs with selections from her album or a snippet of “The Star-Spangled Banner” ala Hendrix. A practiced duet with of Montreal’s singer Kevin Barnes on “Make The Bus” (the band appears on the recorded track) made the flamboyant Barnes look like a gawky teenager asking the belle of the ball for dance. The girl has a vision and the liquid moves to go with. Her uber-smoothness simply made Barnes seem awkward. No easy feat.

Back to “Wondaland” we went as Janelle Monáe hit...