the ascetic junkies mature… into youthfulness 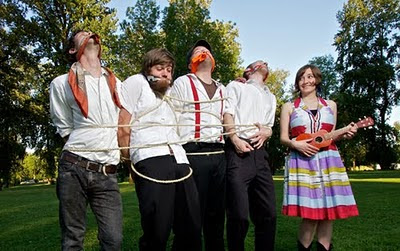 No longer singing about vampires, The Ascetic Junkies are contemplating a move to Canada because neither God nor the Devil nor even the Gov’t can answer their prayers or solve their problems.

Arriving in Portland in 2008 with an album in hand, the couple of Kali Giaritta and Matt Harmon put out their debut, One Shoe Over the Cuckoo’s Nest, with just two Junkies on board. But the self-proclaimed whiskey stompers quickly grew and are set to release their sophomore album This Cage Has No Bottom, an effort that features five band members and no electric guitar, as co-lead singer and songwriter Harmon likes to point out.

Like the first effort, the duo still wrote the album, but the rest of the band had a much bigger role this time around. “It was much more collaborative in terms of arrangements,” says Harmon plus the group had been playing these songs live for almost a year before recording them. Each band member had the opportunity to add his or her own flourishes, all five contributing their own ideas as the vocals, keys, glockenspiel and percussion of Kali Giaritta and vocals, guitar, keys and percussion of Matt Harmon were combined with Cole Huiskamp on bass, Graham Houser on banjo, and Stephen Colvin on drums. The album even includes contributions from Harmon’s mom and dad, on violin and trombone respectively. You can feel the intricacies. And even a little bit of maturity.

But maturity doesn’t mean you have to be stern and unsmiling. Even though there are serious themes (like the above “God/Devil/Gov’t”) throughout This Cage Has No Bottom, The Junkies will always retain their playful lyrical content and sound.

---
Leave a comment on OMN to win a copy of the new CD, a pint glass and two tickets the Junkies CD release gig at the Doug Fir on October 15th.
Posted by pdxnoise at 01:09