sufjan stevens stuns at the schnitz 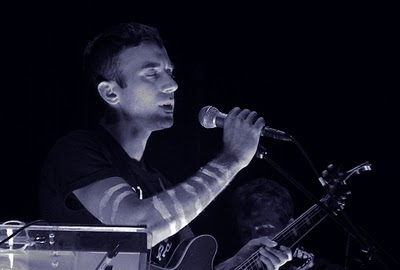 After five years of waiting, Sufjan Stevens indulged his devout fans with 20 new songs, over 2 hours of new music in the form of an hour-long EP, All Delighted People, and a much-awaited sixth album, The Age of Adz. And as he thanked the attentively passionate Portland audience on Friday, October 29th at a sold-out Arlene Schnitzer Concert Hall for their “patience and fortitude,” Sufjan acknowledged that his fans had no clue that come performance date he’d have released two new albums in the span of just two months but also that he’d be performing exclusively new material.

He expressed gratitude for the troopers in his ten-piece band and then he unleashed “the epic mini-series” of a song, the collusion and conglomeration of everything that had happened in the minutes, the hours, the days, the months, the years, and the decades leading up to the creation of The Age of Adz, which drew inspiration from the art and life of a schizophrenic Louisianan sign-maker and self-proclaimed prophet, Royal Robertson. All the self-isolation and self-destruction, the pending apocalypse and past abductions, pyschobabble and prophecy and catastrophe, love and loss, affection and affliction: The sum of all these things was a 26-minute live rendition of “Impossible Soul,” the closing track on Sufjan Stevens’ latest album. This came as the second to last song of his set (excluding encore) and after ten songs exclusively from the aforementioned albums.

Patient we were, but also captivated. The breadth of talent on that stage was absolutely entrancing and even though many came to hear tales of Illinois and Michigan (with a few no doubt crossing their fingers for a future taste of Oregon) or even delicate banjo plucking, not a soul was disappointed.

Sufjan’s jerky dance moves coaxed chuckles, his costumed props added smiles, and his Auto-Tuned vox on “Impossible Soul” may have drawn outright laughs but it was only because we were unaccustomed to such a dramatic, artistic transformation performed so perfectly. With two drummers on two drums kits–including electronic drum pads–two female back up vocalists and dancers, two and three trombonists, two on keys and piano, two on guitars (bass, electric, acoustic, banjo), and Sufjan before his lectern, the execution was impeccable. There were no loops. The intricacies of the highly electronic Adz were entirely accomplished with live instruments. The opening, ode to Paul Simon, “All Delighted People” carried tangible power for the initial eleven minutes...