q/a : passing through the pretty lights 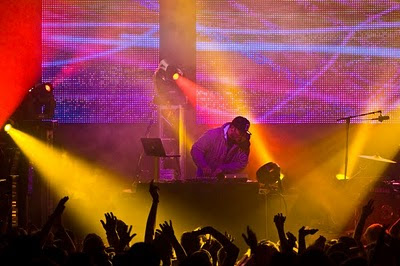 Derek Vincent Smith has been fabricating aural landscapes as Pretty Lights since his first album dropped in 2006, giving away all his music for free on his website. Supported by fan donations, touring and merchandise, the Colorado producer’s sound has evolved from hip-hop-influenced ambiance to banging glitch-inspired dubstep and electro on his latest six-track release, Making Up A Changing Mind, the first in a series of three EPs that will come out before the end of 2010–and all this comes after PL just put out album number three, Passing By Behind Your Eyes, on October 6, 2009.

The man is becoming prolific as he extensively tours including stops at this year’s Coachella and SXSW. Coming to the Roseland Theater as part of the Soul’d Out Music Festival on Wednesday, April 14th, PL does not play a DJ set. He brings along his Monome and live drummer Cory Eberhard. The duo combines machine with man–electronic tapping with crackling drums that stop and start, bend and break, always together, with ultimate precision–all backed by a euphoric multimedia show of dazzling lights and transmuting video.

---
Read the rest and download a track from Pretty Light's new EP on OMN.
Posted by pdxnoise at 00:04