muse was made for arena rock 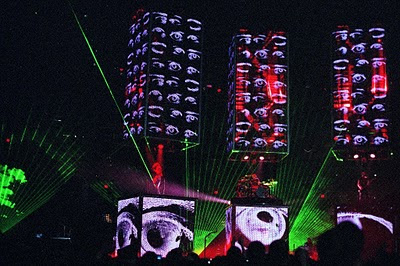 In 2006, Muse played an intimate (by their standards) gig at the Roseland Theater–a venue they easily sold out. Back in Portland on Saturday night, Muse may not have sold out the Rose Garden but they crowded the floor and lower levels with an audience antsy for a show tailored to fit Muse’s musical theatrics.

Frames sheathed in curtains rose from stage to rafters as digital bodies marched on the stairs behind the translucent drapes. At the top, a body fell backwards slowly knocking down the line like dominos. As the white silhouettes floated to ground (reminiscent of the cover to Absolution), the cloak fell revealing vertical parallelepiped pedestals (a term that could likely appear in a Muse song title) where the trio towered above Rose Garden’s floor on their split skyscrapers as the rebellious chorus of “Uprising” was splayed across the massive, video-screened structures.

With guitars holstered on their pillars, singer Matthew Bellamy flicked away at the most electric neck frets as Christopher Wolstenholme’s bass steadily throbbed the open air in rhythmic waves. Dominic Howard’s drum kit rotated 360 degrees as the elongated cubes shrank into the floor...