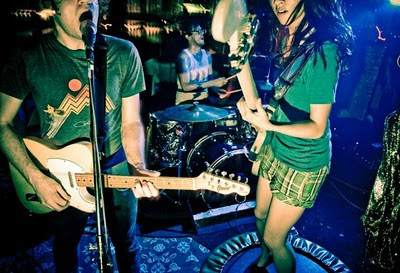 The drums kick, the guitars swing and soar while the samples are triggered. Rumbling, reverb lows and glittering, starry highs make Reporter's rife, extended dance jams float endlessly into the nether universe and beyond.

But the most important thing you need to know about Reporter: Drummer Mike McKinnon is your Potato Champion!

You can catch them on Friday, March 12th at Dance Class with Copy, Push-n-Play, and DJ Maxx Bass.

---
Read this article on The Deli Portland, and vote for Reporter in the Band of the Month poll.
Posted by pdxnoise at 00:35