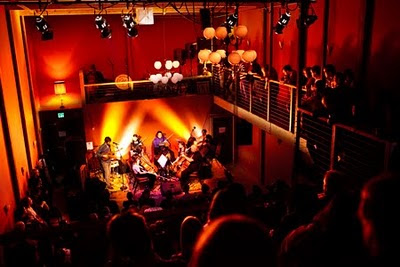 Unorthodox, revolutionary, bizarre rock’n'roll has always been a part of life on Mississippi Ave. But until Jim Brunberg and Alicia Rose came along, North Portland’s indie rockers, folk strummers, roots whiskey guzzlers, electro-dance party-goers, and neo-bohemian, post-vaudvillian eccentrics didn’t have a proper home in the neighborhood–a suitable space for the cornucopia of talent that graces our city.

The guitarist, songwriter, record producer, entrepeneur Brunberg had an idea to create such a home, and he enlisted the talent booker, photographer, accordion-extraordinare Rose. And on Saturday evening, this home–to artists and concert-goers alike–turns one year old… with a celebration of course!

Actually, a Swellebration… as the line up swells with some of Portland’s and Oregon’s best indie, folky, rocky, soulful talent. “We wanted to thank PDX for supporting us and the local music scene through one hell of a recession year by offering a pileup of some of our favorite artists" including :

---
Read the interviews on OMN.