metric is full of frenzied vibrancy 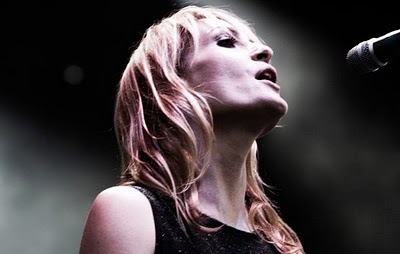 An icy calm settled over the antsy Roseland crowd on Monday night as sighing space-synths floated through the flood of blue dimly lighting the stage. Head down, blonde locks dangling, Emily Haines puffed through the sedate lyrics of “Twilight Galaxy” while the rest of Metric caressed their instruments to the robotic beat. Anticipation thick, the room boiled as rough analog synths broke loose and white strobes percussed eyeballs with as much violence as the drums on stage. Breathy, sexy vocals exhaled gloomy profanities on “Satellite Mind” to the elation of the Portland audience.

During a concert that ran like their latest release, Fantasies, on random, Metric’s Emily Haines was an indie-synth diva, hooting and hopping, running end to end across the stage, stopping just long enough to give her keys some love.