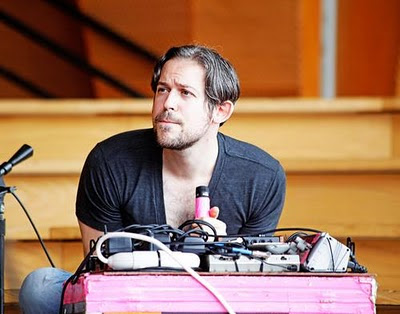 The creative force behind Black Moth Super Rainbow may be moving on. After churning out a BMSR album according to a “formula” in 2009, Tobacco was not satisfied with the product simply declaring, “Eating Us is probably not my best work.”

Everything that didn’t fit that formula, “and there was a lot that didn’t fit into that formula,” Tobacco put aside but let it live its own life, just for fun. Not intending to make a record, songs developed organically in the dark, grinding grit that is Tobacco’s signature fuzzed out, mucky crunch.

BIG hip-hop beats, sinisterly microwaved to meticulous perfection, this collection of BMSR rejects accidentally became Maniac Meat, the second “solo” album, well, his second under the name Tobacco–the antithesis to Eating Us. In the recesses of Tobacco’s core, his essence for pop remains–a sensibility that is damnably tantalizing to all ears it pricks. “Party music” is a deceiving term, but Tobacco’s new cuts are decidedly bright and walk with a swagger.

And who else to strut around the indie kingdom with but Beck? By fate or circumstance, he is the only guest on Maniac Meat...

---
Read the rest of the inteview on OMN.