last stop : explode into colors + quasi at the doug fir 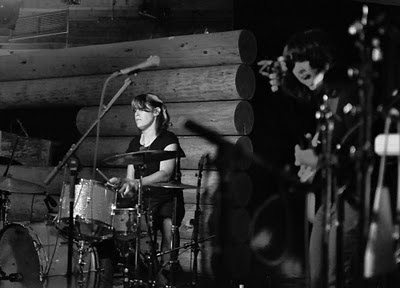 Welcome home Quasi and Explode Into Colors. The last stop on a tour that took them from PDX to SXSW and back was thankfully at home. While Explode Into Colors left their rougher times on the road, Quasi may have experienced their roughest right at home on Saturday at the Doug Fir. Shredding and screaming since the early ’90s, you are bound to have an off night–at least it happened in front of your most loyal fans and friends… or does that make it all the more frustrating?

The set started off smooth for Quasi as guitarist Sam Coomes’ sandpapered vocals burst with fervency as he perched atop a speaker and flicked licks across the cheering crowd on “Repulsion” off their latest release, American Gong. Complemented by drummer Janet Weiss’ vox from behind her kit, Quasi’s mid-90s sound could almost be called vintage these days. The rebellious, indie rock’n'roll trio from Portland played songs from their last 15 years with rapid, punky instrumentalization and surging folky electricity...