home from sxsw : quasi + explode into colors at the doug fir 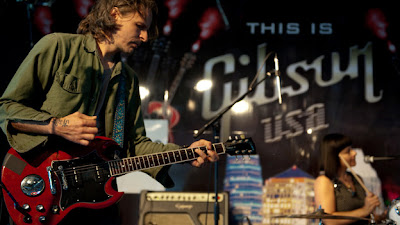 The showcases are over, the street corners are considerably less crowded, and the bands are on their way back home from SXSW. Using the time on the road before and after the jaunt to Austin, most bands make a few stops along the way. On Saturday, March 27th, our indie rock darlings return to Portland for their homecoming showcase… at least that was the plan.

Both trios, Quasi and Explode Into Colors, played official SXSW showcases on a tour that saw them hit 15+ cities planned around their time in Austin. With two decades of gusto behind them, NW indie-staple Quasi showed their “rebellious, anti-corporate, loud rock’n'roll, peppered with pop harmonies, shredding guitar solos, hum-able bass lines and long drum fills” (according to drummer Janet Weiss in an interview with Spinner before SXSW) to a crowd at the Gibson Guitar Showroom that was record by Seattle’s KEXP and is now streaming on NPR.

OMN spoke to the bombastic rhythm makers from EIC just after their gigs at SXSW and a trip into Monterrey, Mexico for the MtyMx Fest. But then Explode Into Colors blew a tranny somewhere in Oklahoma and got stuck in San Antonio…

---
Read the rest on OMN along with tour notes from EIC.
Posted by pdxnoise at 00:19