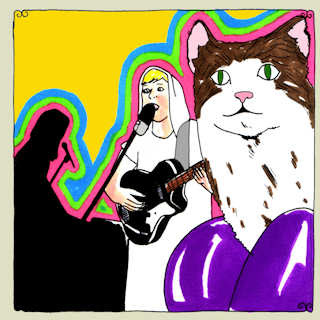 Nurses were the latest PDX band to visit the Horseshack and lay down 3 live tracks for Daytrotter, which you can download for free!

In their worming and brooding manner, Nurses took three psychedelic tracks from Apple’s Acres, put two together as an 8 minute amalgamation ("Technicolor/Man At Arms"), and recorded an unreleased beauty.

Sadly, Nurses just played their last PDX gig this week (opening for Atlas Sound) and won’t be back for a while when their tour with The Tallest Man On Earth comes to the Mission Theater on Tuesday, May 11th.

In other big Nurse-news, the trio will be rocking this year’s Sasquatch Music Festival on Saturday, May 29th. Other PDX acts playing the 3-day Memorial Day weekend fest include YACHT (who rolled Holocene this week), Quasi, Portugal. The Man... and if we can count them as one of ours... the Pavement cash-grabbin', alt-rockin' reunion show. Frontman Stephen Malkmus does live here after all!

---
Read this article on The Deli Portland.
Posted by pdxnoise at 19:42