the ascetic junkies grow, whiskey stomping their ‘urge to rock’ 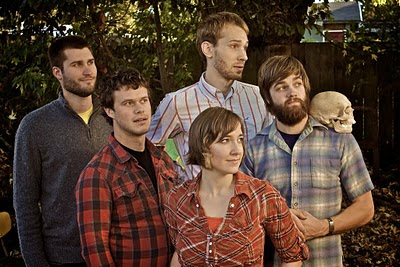 Matt Harmon and Kali Giaritta are original Junkies. These two Junkies are connected at the hip. They do everything together and now they’re engaged.

But as the two Junkies have grown closer together, they’ve also allowed others to sneak into The Ascetic Junkies–a band that started as two in Boston but has organically swelled to five in Portland.

Matt and Kali arrived in Portland two years ago with an indie-folk album written and recorded in Kali’s bedroom. Two thousand eight’s One Shoe Over the Cuckoo’s Nest was “almost entirely Kali and I,” says Matt, adding that they often had to coax friends to fill in the instrumental gaps on stage as there was no fixed line up for the East Coast Junkies.

Email ThisBlogThis!Share to TwitterShare to FacebookShare to Pinterest
Labels: holocene, the ascetic junkies, the dimes