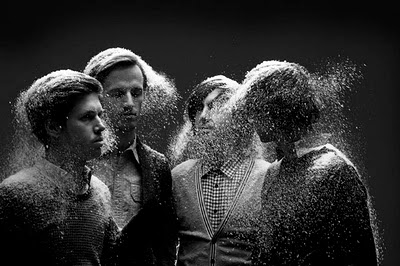 After six long months in a Melbourne warehouse, Cut Copy emerged with their third record, Zonoscope, in February of this year. Their most cohesive yet sonically complex effort to date, the album has propelled the quartet to new heights, seeing them travel the world and selling out gigs along the way.

And the Zonoscope was the part of process that has afforded them this success. As Dan Whitford (vocals, keyboard, guitar), Tim Hoey (guitar, sampler), Ben Browning (bass), and Mitchell Scott (drums) hunkered down in that “old, dusty warehouse,” they quickly discovered a tropical air permeating their sonic experimentations and soon this aura pulsated throughout all their new creations. This imagined world was in utter contrast to their homemade recording studio surroundings, but as the “tropical, tribal, almost exotic sounds” kept naturally flowing the Zonoscope became the “device for looking into the world that we created making the record,” explains Dan Whitford. “The Zonoscope is some sort of telescopic, weird contraption that you look through to see into this world.”

Finding inspiration in experimenting with new instruments and through reinterpreting their own influences, you can hear the innovation of vintage sounds in every track on Zonoscope. Swirling vocal patterns two-thirds of the way through “Where I’m Going” stir up hazy memories of The Beatles’ “Within You Without You,” minus the sitar and strings, over twinkling synths reminiscent of The Who’s “Baba O’Riley” until the dance-ready beats, yeahs, and hand claps are reinjected.

“Need You Now” is a yearning, dramatic album opener that builds, like much of Cut Copy’s 5+ minute tracks on Zonoscope, into a dance-y bliss (watch above). The deep, commanding form of Dan Whitford’s opening vocals remind of Dave Gahan’s balladry (and so many other ’80s anthems) while you can’t help but hear the tiniest bit of New Order in the electronic drums of “Blink and You’ll Miss A Revolution.” And closer “Sun God” rocks like a funky Happy Mondays cut with repetitive, Shaun Ryder-touched chants and a jammed out, Euro house breakdown that goes on and on.

The layers are multitudinous and a challenge to recreate live but Cut Copy has been doing it across their “northern hemisphere tour” over the last several months and will continue as they move south. On their first string of North American dates the Aussie pack skipped Portland, but currently on their last set of US dates, Cut Copy will finally bring their tropical vision to Portland’s Wonder Ballroom on Sunday, October 9th with equally danceable performances from Washed Out and Midnight Magic.