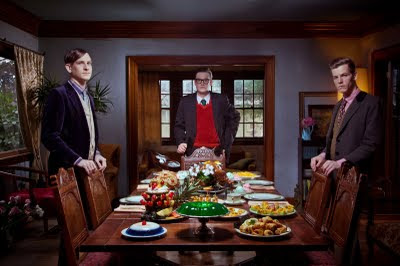 Portland electro-dance-starters Starfucker (STRFKR) may have lost a longtime band member (Ryan Biornstad) and picked up a family-friendly letter mash, err, moniker since the release of their second, highly-anticipated album (Reptilians) in March, and now they've revealed their third video (see one and two here) from Reptilians for "Bury Us Alive." The Joshua Cox-directed cut is full of dreamlike visuals where some kind of out-of-body, psychedelic trip meets a space burial while a moss man's face flowers, and it's all concluded by bodies crumbling into carbon dust. Plus, there's four of them in the clip.

Freshly a trio, comprised of songwriter/producer Josh Hodges, bassist Shawn Glassford, and drummer Keil Corcoran, the band has shown no signs of slowing down as they've recently played for massive, West Coast festival audiences at both San Francisco's Outside Lands and Seattle's Bumbershoot with the addition of Ian Luxton and Patrick Morris (of Strength), both on keys, guitars and vocals, to their touring crew.

And the exciting ride continues for the local boys as the touring schedule soldiers on around the country, wrapping it all up in Portland on Wednesday, October 5th at the Wonder Ballroom with The Pains of Being Pure at Heart, Big Troubles, and their Mexican touring buddy Alexico. Expect them to play their newest song, "Dragon Queens" (below), from their recent Polyvinyl, 7-inch split with Champagne Champagne.