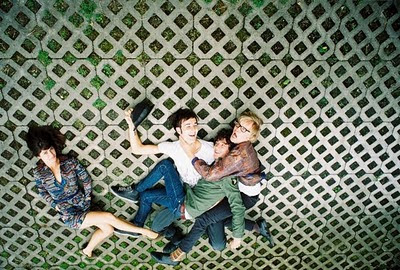 Cameron Spies and Lizzy Ellison craft a nice press release. In what was likely the first one ever sent out (last February) for their latest project, Radiation City, the two declare to have

“cooked up yet another darling sound to tear you away from your TV dinner. The calmed echoes of amplifier tubes and secret gramophones, the soothing, sonic smile of a warbling Wurlitzer, and precisely sparse heart-throbbing drums bounce from the analogue souls of our newest musical Ozzy & Harriet.”

But the duo, who are also responsible for the electronic-psychosis of Spesus Christ, the minimalist ambience of Soap Collectors, the tape label Apes Tapes, and are a couple, have been more than able to back up their enchanting descriptions with bona fide recordings and live performances. What is heard on “The Color Of Industry” (below) holds fast when the quartet plays out–the warm, fuzzy effect the record has on your ears only heats up your body in person making the vinyl-pop nostalgia a living, breathing reality.

The (again) self-described “soothing siren-lullaby” of Ellison is contrasted by the once-in-a-while coarse vivacity of Spies in a perfect blend of guy/girl vocals that are further complemented, while the emotion is complicated, by the chemistry of bassist Matt Rafferty and drummer Randy Bemrose–who both supply additional harmonies. But it’s not all dreamy prose–unadulterated passion rears it’s head as formidable synths and guitar mix Brazilian jazz and ’50 melodies with modern dance and indie rock as vocals wail over bossa nova rhythms, from the rim-clicking clave combined with electronic touches on the album opener “Babies” (watch a home-baked chicken ‘n waffles edition via Into The Woods below) to digging in deeper on the heavy-soft undulations of ”Park”–their newest single, which you can listen to as the final cut on this Baeble mixtape. (Spies explains “Park “was conceived just after I first met Lizzy. I was still living down in San Francisco, and she was living in Portland. The song was simultaneously a lament about the distance between us and excitement about knowing her.”) With so many other hazy contemporaries around town, Radiation City may just float to the top based on their synchronous spark and the elegance of Lizzy Ellison’s voice in the live arena.

After a few tape releases on their own Apes Tapes, Tender Loving Empire quickly snatched up Radiation City and will re-release the once tape-only debut The Hands That Take You (stream the entire album here) on September 27th on CD, vinyl and as a digital download. Just returning from a comprehensive, 25-date national tour, the band will wrap it up with one final date: a proper release party this Saturday, September 24th at the Doug Fir with dream-pop pals Blouse and moody, avant-popsters Aan.

---
Read the rest and watch a video interview on OMN.