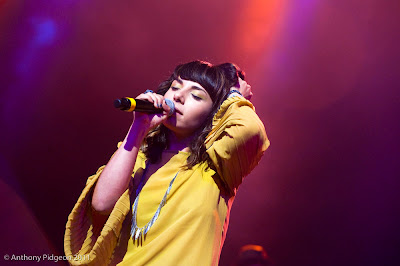 The latest Thievery Corporation album felt too dark. Musically, both the dazzling sounds of the sitar and a Corp staple, the lively, patios-rapping duo See-I, were notably absent. Many of the dub-reggae influenced vibes gave way to bleak raps and sullen slow jams--albeit, TC does that well. There's still plenty of beauty in the music but the world incited is one of distress, paranoia, and surveillance; the album's art points a jet-black security camera in your face below the title: Culture of Fear.

Yet, as the Corp chandeliers lowered from the darkness, settling above the stage, on Wednesday, September 14th at the Arlene Schnitzer Concert Hall, Portland already knew that Thievery Corporation Live brings a completely different atmosphere. For one night the familiar downtempo electronica was sensationally uptempo.

Recreating live what DJ/producers Rob Garza and Eric Hilton have done in the studio for more than 15 years is no easy feat but a couple busloads of talented artists and instruments could do the trick. With seven players on stage, including a two-piece brass section, two guitarists, keys, percussion and drums (but no Hilton), and a revolving door of seven guest vocalists, the audience was starved for Thievery Corporation's international blend of acid jazz, reggae, trip-hop, funk, dub, electronica, and hip-hop. 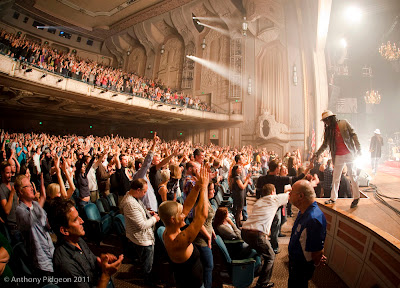 The entire concert hall was up, standing and shaking hips, from Rob Myers' distinctive opening sitar notes on "Lebanese Blonde," accompanied by the exquisitely airy vocals of Buenos Aires-born Natalia Clavier, to encore closer "Light It Up" where all five guest rappers, Sleepy Wonder, See-I, Ras Puma, and Mr. Lif, plus a throng of dancing ladies from the audience filled the stage as the show-stealing, barefoot-grooving bassist Ashish Vyas took to the front row.

The varied cast of vocalists, with a new face taking center stage on at least every other song, made it almost easy to forget all the live instrumentation creating TC's intricate, beat-heavy textures until they put you in the dark and gave the crowd an instrumental breakdown highlighting the body-vibrating, low-end basslines, the critically involved auxiliary percussion, and the booming kick drum beat, on which a classic Thievery Corporation target, painted Rastafarian green, yellow and red, was emblazoned--it was mind blowing.

Two overstuffed chairs also flanked center on stage, and as the concert opened, Rob Myers picked up his sitar and sat cross-legged on the cream psychiatrists-like lounger on the left for "Lebanese Blonde" with a shit-eating smile on his face... and ours. The minuscule rouge velvet armchair right was later, daintily, filled by the stunning, Iranian-born songstress LouLou Ghelichkhani on "Sweet Tides" during the second song of the encore after Rob Garza came down from behind his keys and electronics to play guitar on an instrumental jam.