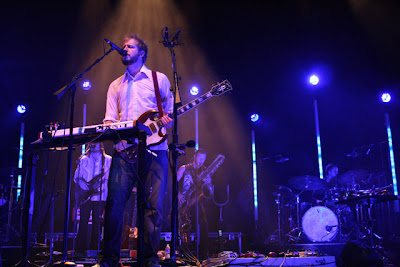 Powerful may not be the first adjective associated with the serene indie folk of Bon Iver but as the Bon Iver big band took the stage on Saturday night, a sold-out Edgefield knew they were in for a stirring evening.

With nine musicians on stage including singer-songwriter Justin Vernon, the band of choir boys organically recreated the intricately melancholy moments from Bon Iver’s small but complex catalogue. Opening the show with the first two tracks from his recently released, eponymous second album, they demonstrated an impressive display of musicianship. Supported on the rear flanks by two drummers and their kits (Matt McCaughan and Sean Carey, who also contributed piano), the cast of many swapped guitars for violins and brass, from the French horn to the trumpet and sax, and a woodwind or two all masterfully played by Mike Noyce, Rob Moose, Mike Lewis, and C.J. Camerieri. Reginald Pace traded trombone for bells, chimes and an intensifying thunder of mallets on a cymbal, and the always impressive Colin Stetson blew the largest baritone sax known to man in his sleeveless Iron Maiden tee.

But the entire show was typified by the performance of “Creature Fear” where Justin Vernon traded moments with his band. Close your eyes and you might assume there were just one or two performers on stage until the full glory of the eight backing Vernon coalesced, scaling swift peaks and seamlessly transitioning between sparse and immense. Vernon’s solo falsetto gave way to robust choir boy harmonies, the careful, solo strum and brushed heads burst into an invulnerable uproar, and natural euphony became aberrant with experimental eeriness topped by trilling electric guitar and squeaking violin.

Like another Midwest boy who’s an incredible songwriter and performer, the commanding stage presence of Bon Iver recalled a less theatrical Sufjan Stevens. Confirming this straightforward bent, Vernon announced, “We’re gonna try a cover we learned today. This is for all you Ahmericans out there” as he embodied the opening verse lyric “The country I come from is called the Midwest,” doing his best Dylan imitation (but quickly dropping that act) on “With God on Our Side.”