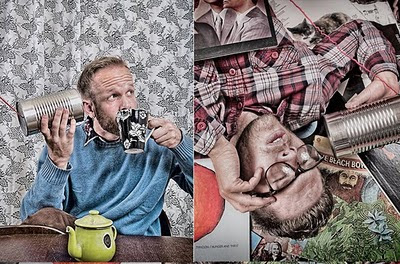 The Orwellian dubbed DoublePlusGood has anything but a straight-laced, tyrannical reputation.

In the last two years, the PDX “glitch-pop” duo has been a staple around town in the electronic scene, heating up basement dance parties and tiny bar “stages” (aka corners) at Valentines as well as sweaty all-ages affairs at Backspace or the adult-only Mississippi Studios with loaded electro-pop originals and a sometimes cover of Rihanna’s “Rude Boy” or Beach House’s “10 Mile Stereo.” Next week they’ll play Portland’s latest, hippest bar stage at Bunk Bar on Tuesday, September 20th with Youth.

Although Erik Carlson and Andrew Nelson count the live gigs, especially the fact that they’ve been able to book most of their own bills, and a West Coast tour as highlights of the past year, the real triumph (and relief) was the release of DPG’s second album, Here They Come, The Birds of My Youth, on August 27th at the Doug Fir via SoHiTek Records–the label run by Carlson.

An album that’s been more than a year in the making, Here They Come, The Birds of My Youth is the first DoublePlusGood effort as a duo; producer and vocalist Erik Carlson added drummer Andrew Nelson in 2009 as a live drummer but the relationship spilled over into the next recording, which was completed almost a year ago but “for whatever reason we made the process as cumbersome as possible,” says Erik. ”We did not streamline this,” he laughs.

Erik’s songwriting inspiration came from the pop melodies of Pet Sounds-era Beach Boys and both had a penchant for Phil Spector’s ’60s recording techniques. But even with a cohesive vision for the album in mind, the process was easily prolonged. From scheduling time to record in a huge concrete, “bomb shelter basement,” as Andy puts it, which was once a Ford Model-T factory, to organizing the general prerequisites of mixing, mastering, creating artwork and finding money to press the albums, the record was finally ready a year later than anticipated.

But Here They Come, The Birds of My Youth finds the band at its densest and brightest–layers of Carlson’s affected, melodic vocals ride sonic levels of bleeping, twinkling synths alongside added samples that glisten and chirrup, and it’s all backed by the echo-y thump of Nelson’s live drums–and also their proudest. And while the two have been perfecting so many of these songs live over the last two years, the live favorites sparkle in their recorded form.

---
Read the rest and watch a video interview on OMN.
Posted by pdxnoise at 12:19