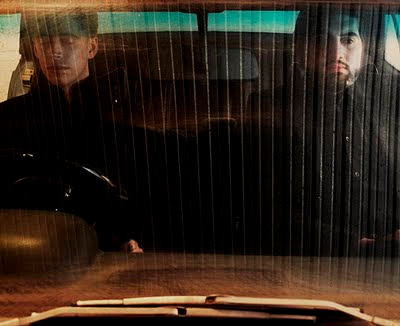 After Digitalism released their debut album, Idealism, in 2007, the Hamburg duo of Jens “Jence” Moelle and İsmail “Isi” Tüfekçi had to sit back for a while, allowing the world to ”absorb it.” Sitting back isn’t entirely accurate; they did tour their asses off and then they holed themselves up in their studio bunker to begin work on 2011′s flippantly titled I Love You, Dude.

The new album merges loads of styles derived from myriad influences for a record that ”keeps things simple yet [is] completely full of sounds,” according to the band. I Love You, Dude falls somewhere between Daft Punk (on the closing tracks “Miami Showdown” and “Encore”) and Cut Copy (on the single ”2 Hearts”) yet offers a distinctively Digitalism, electronic flavor on the album opener “Stratosphere” and first dish “Blitz” alongside the places where it wanders into more vocally prominent territory (“Circles” and “Forrest Gump”) in a manner not heard on previous material. There’s a chilled trip hop vibe with the added female vox of ”Just Gazin’” while the dance-punk screeches and abrasion of “Reeperbahn” are anything but calm but immediately followed by classic, Digitalism-ized house on “Antiobiotics.”

Describing their sound as “cinematic electronic 2180’s music that’s full of riffs,” Digitalism are visual thinkers, imagining “movie scenes to our music” and titling the songs as such once tracks are finished. The most playful poke of this technique is “Forrest Gump,” a song co-written with The Strokes’ Julian Casablancas and which feels like it could fit on his solo 2009 album, Phrazes for the Young. But the result is better than the frontman’s affair with synths because the source material comes from experienced electronic masters rather than a one-off attempt.

Digitalism’s live performance has also been noted over the years as the duo, along with a touring drummer, gets the nod to headline this summer’s HARD Tour, which stops in Portland at the Roseland Theater on Thursday, August 4th. The line up is stacked, also including electronic duos and solo acts like British house makers Jack Beats and French electronic producer Gesaffelstein. (The originally publicized bill included DJ and HARD creator Destructo and London dubstepper Caspa, but Caspa broke his leg and Destructo, being the organizer of all the HARD parties, will be forced to stay in LA to prepare for upcoming festivities.)

To get ready, listen to Digitalism’s HARD Summer Tour mixtape below:

OMN had the chance to catch up with the duo, chatting about the new album and their influences, before the tour kicked off.

It’s been four years since your first album. Why so long in between albums?

First of all, it seemed like after we dropped Idealism, it took the world a while to absorb it. In some countries the album was released before people had even heard about us. We then went on tour for the next years, played lots of concerts and festivals around the globe. It didn’t really feel like we had to make a new album very soon [after] or that people were ready for the next longplayer. About two years ago, we stopped the live tour and started doing DJ gigs again, which was kind of “back to the roots” for us, because that’s how we started. We could try out new tools and ideas from the studio without people knowing about it. We then started working on the new album last year and now we’re here! It didn’t take very long to make it, but we think we needed that time in advance.

I Love You, Dude definitely shows growth in your sound. There are moments of Idealism-era Digitalism but there also seems to be more material with prominent vocals and several songs that are stylistically very diverse. How did this evolution happen?

It was quite a natural development for us. Compared to our first album, the new one feels like it was written by a band rather than made by producers. That’s probably because we’ve been playing so many live shows and gained so much new experience around the globe over the last years. We learned a lot during that period. Before we started the band, we had never been to a festival before, and we had never played live. So the songwriting was something that was new for us, and it kind of started with “Pogo” and a few other songs on the first album, but since it was so much fun doing that and performing them, there was no doubt that we would take that even further on the next record.

I Love You, Dude definitely reflects that live background now, as the songs aren’t based on the usual “club tempo” 130 BPM anymore. The music is much more extreme, the disparity between the songs is bigger now, like there’s really fast or slow songs, more melodies or much harder elements. It shows our current musical taste, and that has evolved over the last years. And of course, we feel more grown up now.

What’s the story behind the title of your new album: I Love You, Dude?

The title was a pure gut-decision...