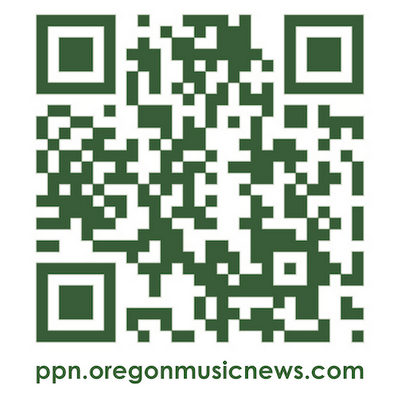 That’s right! We did it once at this year’s Waterfront Blues Festival and we’re doing it again for the 2011 PDX Pop Now! festival. Oregon Music News is proud to announce that OMN Mobile (ppn.oregonmusicnews.com) is officially live today and will be your mobile source for information on the 2011 PDX Pop Now! fest, which runs from Friday, July 22nd to Sunday the 24th at Refuge.

You’ll also be seeing this QR code around the fest on flyers, posters, banners and t-shirts, so make sure you’ve downloaded the requisite app from your App Store or Marketplace so you can scan it.

Like always, the 2011 PDX Pop Now! fest is free for all ages and includes more than 40 performers on two stages. It’s three days full of everything from bands you’ve never heard of, because they’ve yet to record or release much music or because you’ve been sleeping under a rock for the last 15 years (Rollerball), to reunions (The Minders) and send offs (Guidance Counselor), to scene mainstays. It’s indie, R&B, punk, electro, psych rock, hip-hop, folky singer/songwriter, dance, metal, pop, and two-steppin’ bluegrass from some of the hottest bands around town.

We’ll be publishing several smaller previews of our favorite acts over the next week as the festival approaches but the real meat of our content can be found by navigating through the mobile site where you can find the complete schedule, general fest information, and artist bios including past OMN coverage like interviews, live reviews and mp3 downloads plus a place to share what you’re doing and who you’ll be seeing on Facebook.

At the fest, we’ll have live coverage of each day (which can be accessed on your phone as soon as it’s published) complete with photos and video. Stay on top of everything by following us on Twitter @oregonmusicnews and use the tag #PPN in your tweets.

We could tell you to check out the image below for the complete line up… or you could click on it and take it with you on your phone. See you at PDX Pop Now!