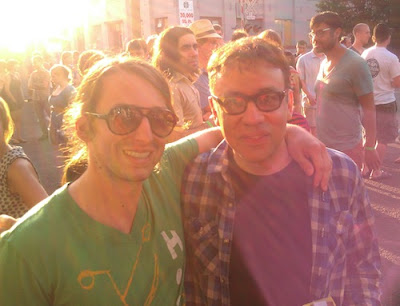 Sunday, July 24th was hot, inside and out, at PDX Pop Now! 2011. It was day 3 of the all-ages, free festival at Refuge, and although we didn’t catch every single band today, it was likely the top overall day of music at this year’s fest. Saving the best for last, here are some of the day’s highlights, in chronological order no less.

Unassumingly emotive: Lizzy Ellison of Radiation City and her slow building soulfulness. Delicate but strong at the same time, once you realized this girl could really sing guitarist Cameron Spies took the lead vocal role for some male-female interplay. Cameron was equally passionate albeit a little more brash at times until Lizzy brought him back into her delicate range, which was not quite as airy as Beach House’s Victoria Legrand or as robustly soulful as Amy Winehouse but somewhere in between with a touch of Regina Spektor. Radiation City verged on sunniness but remained coy like a single sunbeam peaking through the clouds on a gray day, timidly bursting through the last nebulous layer in preconceived streams.

Rough around the edges: And being exactly who they are were The Woolen Men. Swapping instruments and vocal duties, playing a stripped down, stand up “drum kit,” their closing song “West Coast” reeked of wild Captain Beefheart and Lou Reed’s lyrical chatter.

We all need at least one slogging, heavy metal set per day: Thanks goes to Diesto and their varied stack of beat up Orange, Marshall, Hiwatt, Ampeg and Yamaha amps. Also a fan of Red Fang? Try Diesto’s latest, High As The Sun, recorded by Red Fang’s Adam Pike.

Most likely to bring classical music to your street corners and coffee shops or even Holocene: Classical Revolution PDX

Hottest electronica set: With an arsenal of electronic noises, Onuinu (On You In You) built a dancey set that morphed from chillwave to the whole room moving, smiling as he competed with the passing train whistles. If the names Tropics or Deaubird sound familiar to you, Dorian Duvall has also gone by those monikers but today he deftly turned knobs, mic clutched in hand. Adding his own vocals to the mix while steadily increasing the energy, he might be a shining point in this rising class of solo, young electro dancemakers.

Fred Armisen spottings: One. And there’s the proof. Plus somebody from @PortlandiaTV was retweeting our stuff. Thanks!

Besting the noise of a passing train: Look outside through the garage doors of Refuge and you’ll see a flow of freight cars noiselessly floating by. That’s because Holy Sons was easily drowning them out with their melodic, psychedelic, fuzzy, haunting, dusky rock. Led by Emil Amos (of Grails), the vocals were wrenching, although Emil did show a softer and quieter side at times, and backed by his talented band, which had no use for keeping things concise.