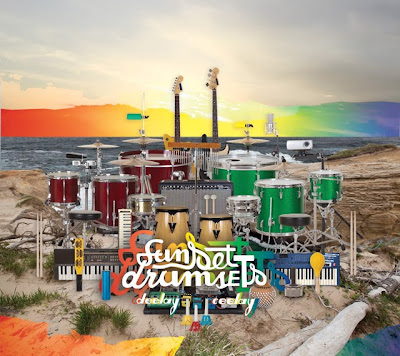 Two drummers. Beating two drumsets. To an electronically orchestrated mash of samples and live instrumentation. Backed by a psychedelic stream of chaotic yet naturally flowing visuals projected on a massive sheet screen.

To many, it may seem daunting to pour your heart and soul, time and finances into a band that might not be well-received or even perceived as a band. An experiment that could’ve existed as a one-off art project.

Don’t think the band didn’t have their own reservations.

Reflecting on their beginnings, Chris states, “It felt like an experiment. The idea was: ‘We’ll just be two drummers.’ And I didn’t really think… I wasn’t sure that it would work to be honest.”

Then again, if you’re creative and optimistic, it might not be a stretch at all.

“So it was encouraging after our two or three shows that it was as fun as it was and people seemed to respond to a degree,” Chris continues. “It was kind of a surprise, but even now, almost three years in, it almost [still] feels like an experiment of sorts.”

And, if you’d describe a song off your debut album, which you worked on “squirreled away for the better part of a year” in a basement, as: “It should sound like an evening party… in a coastal region… in an equatorial city,” followed by amiable chuckling, how can you go wrong?

People, especially Portland people, will seek out this warmth and bask in it, whether it’s hot or cool, wet or dry.

The drumming duo of Deelay Ceelay has encountered the above trials and prevailed with a topically pulsating debut album, appropriately (and awesomely) titled Sunset Drumsets. The percussively talented team of Chris Lael Larson and Delaney Kelly have followed a path of constant refinement which has taken their two-man, audio-visual production from its launch at TBA in September 2008 to being wildly accepted around town as sweaty party starters to their long-awaited, self-released and self-recorded first album.

A creative spark, mutual respect, and friendship were the elements that started this journey some nine months before their first performance, which also coupled as their EP release–Thank You can still be downloaded for free here.

“Wanting to come out of the gates ready to move,” according to Delaney, Deelay Ceelay rehearsed long hours and prepared a vast library of custom visuals, spending an unfeasible three to four months on a single video at one point, in the months leading up to their TBA premier.

The intensive focus on prepping the project “was very intentional [after] having done it the other way in bands for so long… where you get two or three rough songs and go, ‘Yeah, let’s have a show!’ and then have to work them out in front of people,” says Chris.

And although Deelay Ceelay weren’t sure if the band would even work live, let alone how the audience would respond, they were a success and Deelay Ceelay was soon playing all over town, defying classification and never allowing anyone else to brand them.

Chris, with his graphic designer and visual artist eye, brings a distinct ocular vision to all communications including the sunny environs of the new album’s artwork–an album that’s soaked with camouflaged field recordings that create tropical vibes and a bubbling atmosphere, like the album opener “Sidewalking” (listen below).

“It does seem optimistic,” contemplates Chris, adding, “if I had to put an adjective on it.”

And there was a conscious effort to “recreate the dance experience that always happens at our shows,” says Delaney. “For the last two and half years, the only thing people have been able to listen to is a four-song EP that we recorded before our first show,” says Delaney. “Because with the first EP, we weren’t really sure what we we’re doing–if it was in fact an ‘indie’ rock band or a dance/electronic project. With this album we’ve tried to reinforce that we’re more interested in those pulsing dance tracks.”

It’s the knowledge that their experiment does work, on record and on stage, but the two experiences are very different.

“Most people hear about us or discover us through seeing us and then hear the recordings and it’s maybe more toned down. But,” Chris explains, “it can’t not be in a certain way because [live, it's] two drumsets pounding.”

On the new record, Deelay Ceelay has no somber moments; that’s not their style. Auditory samples will draw forth images of treks through bustling cities on the album opener “Sidewalking” (below) and soothing tides on the closer “Ocean Dragons.”

The additional use of scattered vocal samples–speeches by George Andrus, a 94-year-old folk/outside artist who lives south of Salem, OR–resembles former tour mates and friends Starfucker...