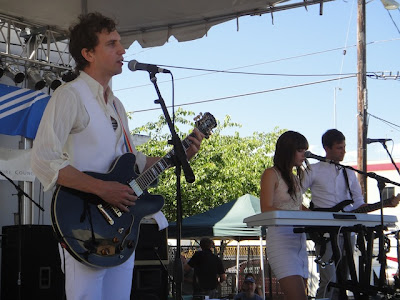 Just a handful of shows into their live career and playing the seven songs they know best, Lost Lander, clad in white attire, showcased the moving songwriting of Matt Sheehy backed by a talented cast (Dave Lowensohn on bass, Patrick Hughes on drums, and Sarah Fennell on keys/vox) plus Brent Knopf (ex-Menomena, Ramona Falls) on guitar today.

Tinged with tambourine, key, guitar, whistling, and drum accents, Lost Lander put together a billowing set of intricate pop from some seasoned players, including the only two tracks you can hear thus far from the band: ”Afraid of Summer” (because Sheehy was so hot up there in his three-piece suit) and “Cold Feet” (as featured on the 2011 PDX Pop Now! Compilation). Find both streaming here.

Lost Lander’s debut album, DRRT, is already recorded and while Sheehy still hopes for a fall release on the album, watch a brief video interview below: