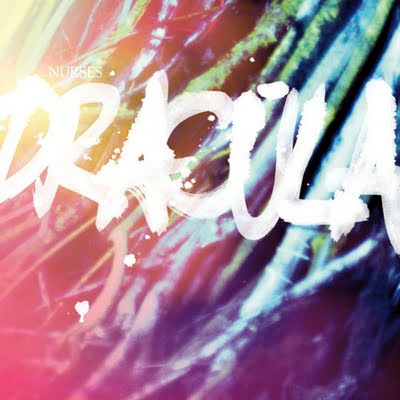 It’s been a quiet little while since we’ve heard much from the unconventional music-making trio of Nurses. Currently prepping to release their third album Dracula via Dead Oceans on September 20th, the band has planted somewhat stable roots in Portland and will be closing Saturday night’s stacked PDX Pop Now! lineup at 11:50pm with a set that will feature Wampire’s Rocky Tinder joining the trio… or at least stripping to his skivvies.

Numerous prospects about this album should excite even the casual fan.

1 — The band hid themselves away in the Oregon coastal forest and shed all instrumental roles to find even quirkier sounds in their environs and minds. ”We just kept contributing ideas until we felt it was right, like three songwriters or producers.”

2 — Focusing “more heavily on groove and beats,” every song may be danceable ”but that’s not all that we want the songs to do.” By their own account: “There’s a lot more energy in everything, which makes for a really fun live experience.”

3 — Finally, Dracula was mixed by a man with “a lot of experience making weird records.” That credit goes to Scott Colburn, who has engineered two Animal Collective records as well as Arcade Fire’s Neon Bible “and tons of other bands.”

Oily as ever, read on as OMN caught the multi-instrumental, many-faceted collaborators Aaron Chapman, James Mitchell and John Bowers for a few questions.

You recently revealed the spectrally hypnotic “Fever Dreams” (below) from the new album. Care to share a couple of words on the track?

“Fever Dreams” was written right before we went to Europe last fall, and it was instantly one of our favorite songs to play, and I think it’s a good song bridge between Apple’s Acre and Dracula. There are a few songs on the album we’ve been playing live for quite a while, like “So Sweet” and “Eternal Thrills,” and I’m really excited about what we did with them for the album. There’s a lot more energy in everything on this record, which makes for a really fun live experience, too.

Where was the album recorded?

We rented a cabin just outside of Manzanita, OR and turned it into our own live-in recording studio in the coastal forest. We were away from our usual lives with all these ideas that we had gathered over the last year or so, and spent the majority of five weeks just working on music, and walking in the forest or on the misty dark beach. The cabin was essentially a large room with a couple doors separating rooms, which made us all involved in every aspect of the recording, and all of us wrote parts for basically every instrument. There were no real instrumental roles, we just kept contributing ideas until we felt it was right, like three songwriters or producers.

What direction is this album headed in?

With Dracula, we focused more heavily on groove and beats–elements that associate with the body and movement. You can dance to pretty much everything on the record, but that’s not all that we want the songs to do. The soundscape elements that were so present in the feel of Apple’s Acre still exist, but used more subtly as emotional undercurrents, and things to tickle your ears while the groove drives the songs.