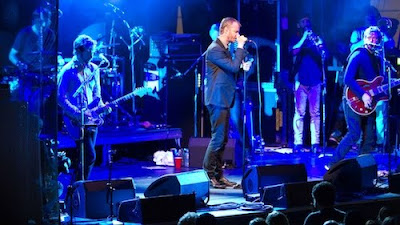 In late afternoon as summer waned on a beautifully sunny Sunday, the delicate electronic folk of Talkdemonic poured through the blocks of downtown Portland from its source in Pioneer Square. The final gig of MusicfestNW 2010 shared its music with the passing commotion, entering cars, cafes and boutiques as the MAX trundled past on all four sides of the square.

Yellow, sky blue, and white stripes flapped on a field of green as the flag of Portland blew in the cooling wind above the square as The Helio Sequence followed, taking the stage at 5pm. The two-man guitar and drums duo readily generated a full band sound of poppy rock that filled the open-air although the acoustics in the wide space were overtly echoey as much of the crowd lounged on the brick steps content to chat through the their set.

In between sets, something finally captured the audience’s attention: The chubby “Spike Can Dance” supplied a solitary, sweaty dance freak out jiggling around in his spandex biker shorts, rolling on the pavement, and finally collapsing in a gasping heap. A red sharpie heart with the word “DANCE” emblazoned across his back, Spike continued with his sporadic dance bursts, surely the most energetic thing to grace the square all night as the next two sets were wholly dramatic.

As the setting sun illuminated the white buildings behind the stage on Morrison St. with its last light, the shadowy stage radiated a soft purple luminescence as The Walkmen aptly opened their set with “Everyone Who Pretended To Like Me Is Gone.” Repeating “I made the best of it” over and over, it seemed The Walkmen were doing just that as more than half of the audience was still disconnected from the action on stage, but like all polite Portland audiences, they dutifully applauded after each and ever song.

With his passionate croon, lead singer Hamilton Leithauser’s poured forth intense emotion, and the drama of The Walkmen’s soaring piano-driven melodies were almost symphonic at times but ultimately lacked any extra kick to really draw people in. The Walkmen’s continually elegant and theatric tunes have never been able to eclipse the tight quality of their biggest hit “The Rat,” from their second album Bows + Arrows released in 2004, and as they shared several songs from their new album Lisbon, which was released today, The Walkmen drearily rolled through the motions...

Email ThisBlogThis!Share to TwitterShare to FacebookShare to Pinterest
Labels: mfnw, pioneer square, talkdemonic, the helio sequence, the national, the walkmen