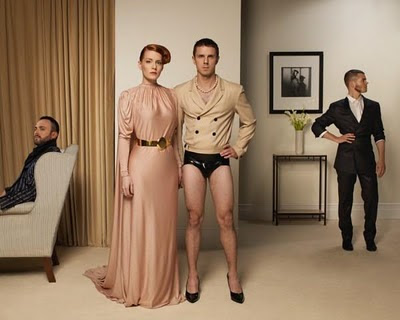 Lady Gaga should take notes from the Scissor Sisters. All the pent-up flamboyant energy that wasn’t satiated by her Portland show has been building inside–unable to be satisfied by hyper-sexualized dancehall reggae nor hordes of emotionally dramatic indie rock. Not even metal can whet this appetite. No, this urge must be satisfied by ravenous glam-disco-rock clubbers who know how to give an audience exactly what they want, over and over again–all night long.

Before the Scissor Sisters stepped on stage Tuesday night until after the unwelcome lights came back on, the Roseland was one constant scream. Like giddy little girls prying for their momma’s attention, everyone from 30-somethings on a girls night out to couples of all orientations and ages gyrated with abandon as the instantly infectious dance party barreled forward on stage.

Lead singers and decadent performers Jake Shears and Portland’s own daughter Ana Matronic shared the spotlight on a stage perpetually hued in shades of pink and rosé, purples and blues. When absolutely everybody wasn’t singing along to every word, they were screaming, uvulas exposed, for the front freaks’ choreographed dance moves–especially Ana Matronic’s robotic jerks–or the sweat dripping down Shears rippled, bare chest during his sexy calisthenics or Del Marquis’ untamable guitar licks. Blinding white and toxic green lasers blanketed the crowd and thunderous applause followed every song as Scissor Sisters shared cuts from all three of their albums with an emphasis on their latest Night Work.

In her bust-revealing, black plastic dress and red side do, Ana Matronic was excited as ever to be home and Portland was thrilled to have her briefly back. She bantered between songs, every sentence unnecessarily drawing massive cheers, but she did put a smile on every face when she said, “My family has been keeping Portland weird for decades” as she announced that her mom was in the balcony–the one wearing the t-shirt that read: "Mama Matronic."