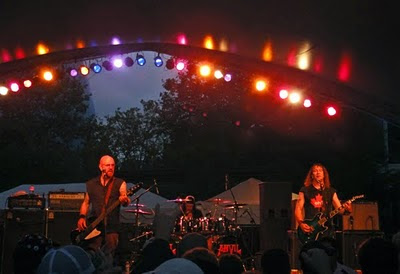 “Yes, metal music is timeless,” declared Lips as bared his teeth in front of a damp Bumbershoot crowd on Monday evening in Seattle.

Anvil has been making (and inventing) thrash metal for almost 30 years now and nothing will stop them. Seattle metal fans had no qualms braving the rain, Ronnie James Dio horns held high, pumping to the pummeling beat and the most important component of metal (according to guitarist and vocalist Lips): “The electric, distorted guitar.”

After headlining major festivals with metal’s biggest names in the early ’80s, Anvil has spent most of the last two decades relentlessly pumping out music–including their thirteenth studio album This Is Thirteen in 2007–but no one was paying attention. The 2008 documentary Anvil! The Story of Anvil showed the world that heavy metal’s original rockers still existed and had been persistently producing music, touring and working hard. Since then, there’s been an Anvil resurgence. And no one could be more gracious than Lips.

“Everything’s changed. We’re famous!” laughed the good-natured Lips when he spoke with OMN a few days before Anvil arrived in Seattle “We’ve been everywhere, man. All over the world, it’s pretty incredible.” They’ve recently opened for AC/DC. This summer they’ve shared the stage with Mötley Crüe, Iron Maiden, and Alice Cooper. People are rediscovering Anvil.

“It wouldn’t be the first time I felt that [we're leading a metal movement],” chuckled Lips. “I dunno, it’s [we are] part of what’s making it revive. I can’t say that I’m going to take full responsibility. It’s definitely brought an awareness that may never have been there otherwise.”

Old fans have always been by their side but, as Lips revealed, about 80% of the fans are new–new converts to metal or others rediscovering the genre after viewing the Anvil documentary.

“How many of you have seen the movie?” he asked calling all the fans his “friends.” Listening to him talk, you understand that he genuinely means “friend” when he says it. “You’ve all been to my house for Christmas. You’ve met my mother!” he exclaimed before the brooding title track “This Is Thirteen.”

Wearing a sleeveless black tee, which displayed his black anvil tattoo, with a red Canadian leaf adorning across the chest, the words “eh?” in the middle, Lips brought his classic, lewd antics to the stage–playing his Flying V with a vibrator, shouting repeat-after-me yeahs into the guitar pickup, or giving himself a “power boost” by putting the hot guitar jack on tongue to produce a squelch of feedback. Not to be outdone, drummer Robb Reiner was indulgently allowed his own extended solo. While the rest of the band took a break off stage, Reiner expelled a blisteringly ridiculous explosion of driving metal drumming, furiously kicking the two Anvil-emblazoned bass drums.