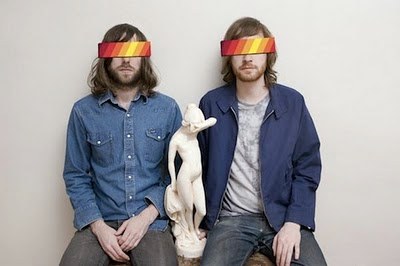 Like the rise of the laptop DJ, you might worry that two heavily produced, instrumental electronic rockers wielding guitars might get repetitive after a handful of songs on stage. Even actively listening to 40+ consecutive minutes of Ratatat’s instrumentation on album can get monotonous (if you’re not listening to one of their hyphy hip-hopped remix albums). But there’s a reason that Ratatat proclaims their genre is: “Visual / Visual / Visual.” They know how to adapt their instrumentation to the stage, whether or not you are on something chemical.

Selling out the Crystal Ballroom on Thursday night, a steady bongo drum rhythm between sets had the seriously antsy crowd clapping and stomping in preparation for the duo’s overdue appearance on stage. As glittering champagne-like starbursts bubbled on the blue projection screen, Evan Mast and Mike Stroud finally emerged and after a brief intro, the ballroom exploded. Ripping into reverberating riffs on the guitar and bass, Ratatat had the entire place immediately pogoing. Hunched, hair cascading over their faces, the twin silhouetted, long-sleeved duo ground through over an hour of wild instrumentation that captivated the dancing crowd.

With a row of colored Lite-Brite-like boxes stretching the length of the stage behind, flashing patterned X’s, and two clear plastic vertical screens flanking either side, Ratatat remained in the darkness letting the lights perform. Their latest album LP4 features a string quartet rather than their traditional Mellotron but playing strings live were their virtual avatars–hologram projections of themselves in garb out of Mozart’s closet, topped with powdered wigs, wearing sunglasses, and reading sheet music–synced with the samples. Water splashes, sparks and sparklers filled the screen as the fierce “Wildcat” flashed with every cat call (like the cover art to Classics), this white bird jived multiplied (like the cover art to LP4), and jungle scenes ranged from the tranquil “Mahalo” (here) to fireball explosions and infrared heat sensations with Predator Arnold on “Mirando.”