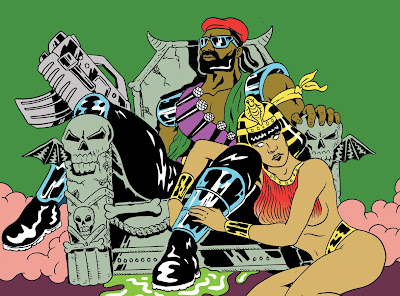 People should be outraged when they arrive at a sold-out show to discover that only half of the act will be performing. But in the ubiquitous age of laptop DJ-dancemakers, who needs to watch another white dude stand behind a table of electronics?

So when only one-half of Major Lazer strutted onto the Roseland stage in his slick suit, nobody cared. Even though the ladies surely swoon for Diplo’s boyish sex appeal, it could have been anyone back there tapping away at that table because the real action was thrusting in front of your face in the form of the daggering, diplomat from the Bronx: Skerrit Bwoy.

Practice daggering with caution and let Skerrit Bwoy give you a quick lesson before you attempt what was witnessed on Thursday night.

As the Philly-based beatsmith Diplo kept to the rear of the stage firing beats like blasts from a Tommy gun, Skerrit Bwoy and his bootylicious momma in a lingerie-like tuxedo dickey knocked bones and boots inciting the hot mess below. Shirts were quickly peeled off and knickers were revealed as bodies saucily slipped off one another drenched in salty sweat, looking to imitate the antics on stage. As Skerrit Bwoy bounced and bruised his girl with authoritative thrusts, helicopter spins, and wheelbarrow kicks, the daggering attempts below were in vain because the audience was too tightly jammed–basically sexually assaulting each other from all sides.

Climbing his ladder and dropping trou, Skerrit Bwoy launched himself in between the spread-eagle legs of his partner, but the lady had her revenge after a night of chauvinist pummeling as she showed girls can play just as rough as the boys taking her own leap from the ladder.