q/a : marius libman is copy + then some 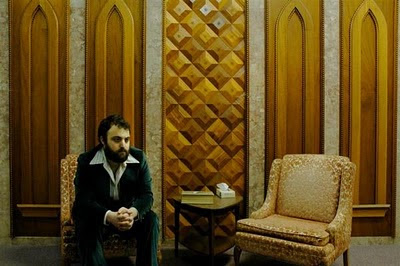 A longtime DJ, Marius Libman began performing his one-man electronic music show in 2005 “before I owned a laptop,” says Libman. “I brought a 14-inch LCD screen, a mini-tower PC and a MIDI keyboard to the club.” Since then under the name Copy, he's armed himself with a MIDI-triggering keytar and put out two hot poppy, electronic albums on Audio Dregs, a few mixtapes, remixed artists like Panther, Ratatat, Truckasauras, and Starfucker to name a few (and they’ve remixed him as well), and held down DJ residencies all over town.

Joining the “arty dance rock” band Atole in late 2008, Libman plays the bass and recently started his own band Astrology with Charlie Salas-Humara (Panther and The Planet The) and Mark Onyx (Dinner and The Main Course). He’s also a curator of the monthly Supernature series at Rotture, which hosted LCD Soundsystem as guest DJs last May and Ratatat last week, along with Atole lead singer Manny Reyes and E*Rock.

“Aaaand I just finished up my new copy record, Hard Dream, and that’s set to come out in August.” Err, that’s what Libman said in May while he was still “fiddling” with and finalizing songs. Fast forward to September and Copy just dropped his third album in four years on the 21st and celebrated with a CD release gig last weekend at Rotture. But the all-ages affair happens this weekend at Backspace with Strength (who also just released their “darker” sophomore album earlier this month).

With a hand in many an electronic pie around town, Marius Libman spoke with OMN about his new album, his new live drummer (Andy Parker from Guidance Counselor), his new R. Kelly remix album, and his new “fast, punk-informed” band that loves to “rock out.”

---
Read the rest and download new tracks from Copy on OMN.
Posted by pdxnoise at 00:06

Nice post, keep up the good work.
Thanks!
Abe