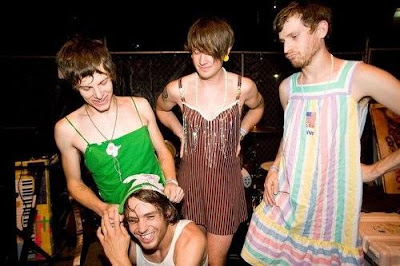 Starfucker is back–in name and tradition. That other band name just didn’t sit right with them, and as the band worked through some kinks on Tuesday night at Mississippi Studios during their second of two sets, Josh Hodges (vox, keys, guitar, and drums here ‘n there) announced that the foursome will “hopefully” have a new album out in fall… under the name Starfucker, which drew congratulatory cheers.

With some technical difficulties and cumbersome pacing, the sound from the floor was poor and the show did not flow. Songs ended too quickly and abruptly followed by long pauses, unlike other Starfucker gigs where songs meld together seamlessly smooth. But it didn’t really matter. After the slow opening drone, party people pushed to the front, tweaking out to the layered loops as the band shook frantically on stage causing you to ponder, “How do those wigs stay on?”