q/a : on the yacht for a globe trot 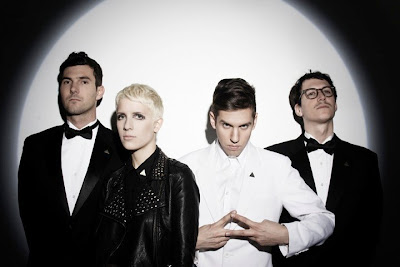 For the last year, this YACHT has been sailing around the world touching every continent possible. One week ago they were playing Bogotá, Colombia. Tomorrow they’ll be back in their home state rocking Eugene’s WOW Hall for University of Oregon student radio KWVA’s Birthday Bash.

Another one week and one day, YACHT will set sail north through the Pacific Northwest to the Gorge to devastate the second day of Sasquatch on Sunday, May 30th.

Less than a week later they’ll be in Corvallis on Saturday, June 5th hanging at OSU for the Flat Tail Music Festival on campus playing a free gig with Neon Indian, Minus The Bear, I Will Be King, and Mt. St. Helens Vietnam Band.

Bam! In July, it’s back to the Eurozone for some dates in Deutschland and elsewhere before rocking the Hollywood Bowl in California opening for the Chemical Brothers and Chromeo on August 29th.

Hot shit! Can you even wrap your mind around this?

They’ve been spreading their individualist ideologies around like wildflowers–sometimes in the form of scripture (like the interview below), but more frequently in the form of jump and bump dance music–all while staying “fascinated with the common ground of underground spirituality and underground music,” blogged Team YACHT just two days ago. “After all, both are motivated by the desire to create something more real, special, and rare than what is being presented by the mainstream cultural machine.”

Which YACHT offers to us as free release of their mixtape Disco Worship: Music for Meditative Dancing, a digital version of the sold-out tape edition that was released on the PDX tape-label Gnar Tapes and Shit.

“The music concert is a series of rituals just as the religious service is; we come together in the dark club, following a sequence of understood rules (hand-stamp, coat check, merch table, posture), and we hope to experience transcendence, to have synergistic and communal experience worth remembering.”

Traveling to spread their message, it’s just the lifestyle when you’re involved in YACHT.