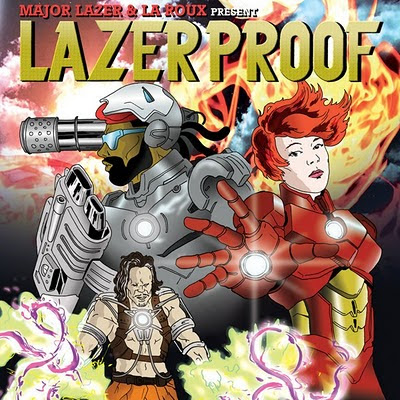 You should already be well-informed by now that Major Lazer is more than just a Jamaican commando fighter destroying vampires and monsters, partying hard, and zooming around on a rocket-powered hoverboard. He also lost his arm in a secret zombie war in 1984. Maybe you’re even familiar with his hype man Skerrit Bwoy and his “Guide to Daggering.”

And if you’re really adept, you’ll also know it’s all a ferociously sexual front for the electro-dancehall duo of producer-beatsmith extraordinaires Switch and Diplo–the hottest remixers and party makers of the last year.

This time they’ve hooked up with English electro-pop, new wave outfit La Roux (who blazed through the Wonder back in April leaving behind them a sonic wake of screams) for a mixtape that features 14 cuts: some fresh, some from Major Lazer’s debut Guns Don’t Kill People… Lazers Do mashed and mixed with La Roux’s self-titled debut, and some with guest spots from Gucci Mane, Drake, Gyptian, Rusko, and Amanda Blank. Damn!

And it’s free from their label Mad Decent. Double damn!!