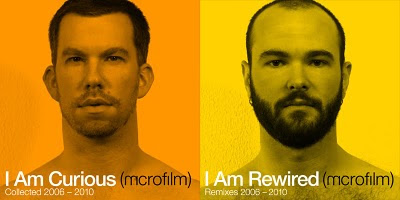 A new 24-track double album compilation from electro-pop group Microfilm will feature 12 Collected cuts from 2006 to 2010 and 12 Remixes. Both will be released this Tuesday, May 11th.

Two hours of often dark yet flittering beats live amongst forests of mechanical snares and cymbals from the Portland producer duo of Matt Keppel and Matthew Mercer. Listeners ride on Kraftwerk’s Autobahn while Daft Punk’s stylized vocals dance between the blips (much like they did on their September-released EP, Blips Don’t Lie). Shifting while steady, Microfilm has mastered their style of droning disco highlighted on I Am Curious (Microfilm): Collected 2006-2010–a 12 track overview of singles and album tracks (with edits and alternate versions), and also covers including Cat Power and Sufjan Stevens’ “Chicago.”

It plays chronologically across the band’s career starting with the 2006 single “Young Adult Fiction” (which was featured on BBC Radio 1) to their most recent, a “slinky,” synthed cover of Queen’s “Body Language.”

---
Listen to Microfilm and read the rest on OMN.
Posted by pdxnoise at 00:04