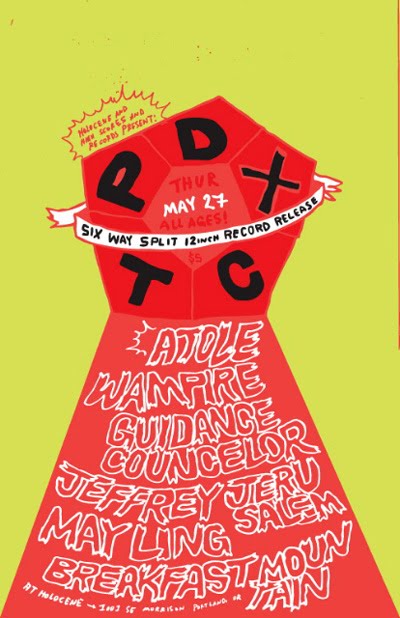 “I was stoked on the idea from the get-go, but I’ve seen so many big group split-record projects just sputter out and never go anywhere,” says Devin Gallagher, the founder of Portland label High Scores and Records and the producer of PDXTC.

PDXTC is a six-way, 12-inch vinyl split featuring throbbing dance music from Portland’s diverse dance scene, which culminates in an all-ages record release dance party at Holocene on Thursday, May 27th. Only missing Jeffrey Jerusalem, five of the six PDXTC artists will be performing starting at 8 PM including Atole, Wampire, Guidance Counselor, May Ling, and Breakfast Mountain.

“This is the best comp of Portland dance music I’ve heard and does a good job of showing the diversity within a scene that outsiders might think is easy to peg,” continues Gallagher.

From Breakfast Mountain’s bombastic helter skelter to May Ling’s dank disco drama and Atole’s atomic punk bounce, the scene is definitely dance: Sometimes sampled, often synthed out, but always pushing forward with experimental electronics and employing an arsenal of instruments, it’s occasionally artsy yet intrinsically dance-y. Guidance Counselor is your medicine for writhing, carnal freakouts while Jeffrey Jerusalem’s electro-disco-boogie will make your booty bop and Wampire’s pop is incomplete without an unselfish clothes shedding routine.

There’s only one thing about these cohorts that is easy to peg: Getting dance floors sweaty is priority number one.

---
Read the rest with interviews from the artists on OMN.