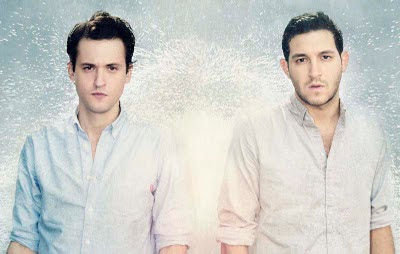 Brooklyn-based boys Holy Ghost! grew up together on NYC’s Upper West Side as hip-hop heads and were soon picked up and groomed by electro, dance-punk DFA Records’ cohorts James Murphy (LCD Soundsystem) and Tim Goldsworthy.

Buzz began to grumble when DFA released their 2008 dance track “Hold On” as the duo of Alex Frankel and Nicholas Millhiser started to stockpile mad remixes, taking tracks from Cut Copy, Moby, MGMT, Phoenix, and more. (Check out those mixes and more on Holy Ghost!’s Winter 2009-2010 Mix Tape here.)

With an affinity for longer, building dance tracks, HG! cuts often clock in around six minutes or more. Their four-track, debut EP, Static on the Wire came out on May 18th on DFA, shows their ability to control energy and atmosphere rather than spewing breakneck radio pop jams that climax before they start. In the vintage synths of “I Know I Hear,” you can hear Daft Punk crossed with Friendly Fires (whose track “On Board” they’ve also remixed).

Releasing their EP on the same day as LCD Soundsystem’s latest (and possibly last?), This Is Happening, the duo remixed LCD’s first single off the new album, “Drunk Girls” (get it here for the cost of an email address), and takes to the road for the first time ever. Bringing along a four-piece band that includes Alex Frankel singing and playing Rhodes, Nick Millhiser on drums, Erik Tonnensen on keys, and Chris Maher on guitar, they’ll hit the Euro fests before opening for Chromeo on a month’s worth of dates from late July into August, including a (second) stop at the Roseland on August 13th with the suave synth-funk Canadians.