This is the third installment in Neighborhood Notes’ series on indie business collaboration through space sharing. 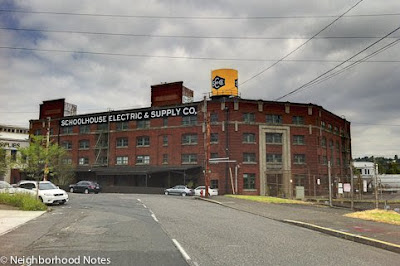 There’s something exceptional happening in the old Pacific Hardware and Steel building on NW Nicolai Street.

More than a century after its construction, Portland-based producers of distinctive, period-specific lighting fixtures and furnishings, Schoolhouse Electric, took up residence in the massive, four-story red brick warehouse, inviting a few friends to help them fill the 103,172-square-foot building.

The old edifice adjacent to the railroad tracks has housed many businesses over the years, but following a comprehensive 2009 renovation, Schoolhouse Electric purchased the property, dubbed it the Schoolhouse Factory, and has since ushered in the most dynamic period in the history of the nationally recognized historic locale.

Founder and owner Brian Faherty has carefully constructed an environment in hopes of making his on-the-edge-of-town, industrial location “a destination.”

To do so, Faherty invited other local, independently owned businesses to share the space, leveraging their audience, products and services to create a collaborative work environment that provides an exceptional experience for customers and collaborators alike.

As Faherty envisioned his future company headquarters, he knew he wanted a coffee shop on-site, not only to create an ambiance and service his own employees, but also to draw customers to the slightly out-of-the-way destination.

Din Johnson, the owner and head roaster at Ristretto Roasters, was attracted to not only the space but also what he calls "the last industrial frontier" and a neighborhood full of artists.

But being an industrial frontier, Faherty understood that the location was not a high foot traffic area, like Ristretto’s other locations. With his collaborative vision in mind, and against the advice of one of his financial advisers, Faherty proposed to Johnson that rent would be free.

"We were looking to leverage his audience as well by putting us in the same building,” Faherty explains. “What we were going to get out of the deal in return for not charging rent was, potentially, customers and just people who were going to come into the space."

Faherty recognized that, aside from setting up shop in a somewhat idle area, Johnson also invested six figures in the build out of the corner coffee shop.

As it stands now, the nascent partnership is still an experiment and the situation may change depending on the results. Faherty alludes to the fact that Schoolhouse will probably charge for utilities in the future, "but in the beginning, we're not charging any rent and we're not charging any utilities because we want to give them a chance to get in and get the word out to their audience, and our audience, that they're here," he justifies.

---
Read more about the other collaborations, like independent designers Anna Mara and Reed LaPlant as well as Egg Press, happening in the Schoolhouse Factory on Neighborhood Notes.