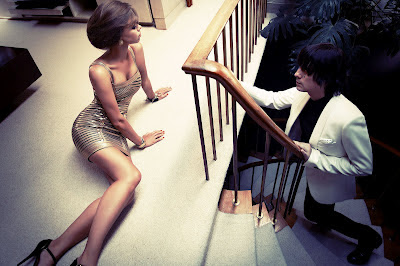 Double duty is often just a warm up for Johnny Jewel, the beatsmith behind the instantly classic, electric-analog dance acts Desire, Chromatics and Glass Candy. It's not uncommon to find the man opening, supporting and headlining a bill that features all three bands, in a glorious night-long marathon of back-to-back-to-back sets.

Incessantly busy and tediously a perfectionist, Jewel is either in the studio, helming the Italians Do It Better label, or on tour or the stage with one of three aforementioned groups. And this Thursday night, he'll kick off the all-ages, electro SuperFest 4 by playing sets with both Glass Candy and Chromatics at the Crystal Ballroom.

While Jewel and his crew determine each night's set list in the heat of the moment, he's sure to share new music from Chromatics recently released effort, Kill For Love, and maybe, if we're lucky, something from Glass Candy's long-awaited "monster": Body Work.

"Ida is at her all time best in the studio," Jewel says of the new Glass Candy record. "It's the record I am most excited about."

And as an added bonus if you attend on Thursday night, Chromatics will be selling double-vinyl copies of Kill For Love for only $10, which is a super-amazing deal because the magenta vinyl just came out on Sunday and the 10,000 copies the band pressed sold out in 12 hours—seriously shocking the band. Regardless, they've already put in an order for more, this time on ice blue vinyl, where "each pressing will be a different color."

You're doing double duty again with both Glass Candy and Chromatics. Chromatics just put out an album this year, the first in five years, and you've been touring behind that effort a bit. What's the response been like so far?

Johnny Jewel: It's been incredible. Chromatics has really come into their own this year. We've been around the world twice on the new record and it's been a blast. Festivals, runways, galleries, pool halls, loft parties, discotheques, opera houses. The only draw back is, we haven't been in North America very much. So we haven't played in Portland since January, which has been really hard for us. Our home town shows are so special for the bands. We are so excited to be there next week. We're all freaking out!

Listen to Chromatics' new album, Kill For Love, in its entirety via Johnny Jewel's SoundCloud:

How do you prepare for a show when you're playing in multiple acts on the bill?