making superfest 4 a reality... by benefiting music in the schools 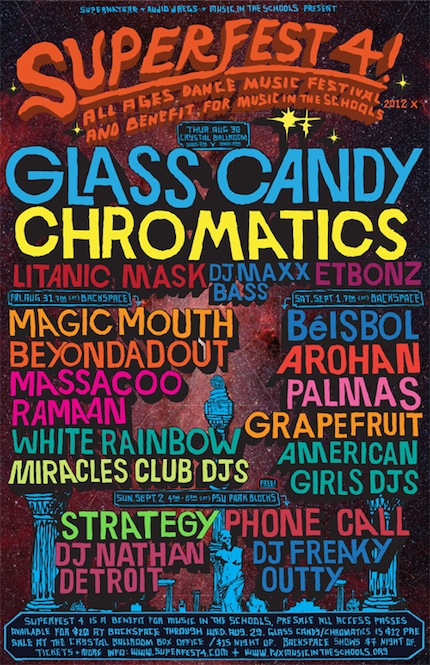 The Supernature and SuperFest crew are back at it again with their most ambitious, all-ages, electro endeavor yet. Longtime supporters of DIY dance and electronic music, SuperFest 4 will encompass four days—from Thursday, August 30th at the Crystal Ballroom with Glass Candy to two nights at Backspace to Sunday, September 2nd on the PSU Park Blocks for a free outdoor dance party—and, for the first time, benefit a local a nonprofit, Music In The Schools, run by Portland high school students.

Working alongside Mast, who "booked half of SuperFest this year and does all the designs," according to Reyes, OMN spoke Manny Reyes about this organizing year's benefit as well as some tips on who to look out for on stage.

This year's SuperFest has notably grown in size and scope, with four days of music and some new venues hosting the fest. But, is this the first year the fest has been a benefit?

Yeah, totally. This is the first year SuperFest is a benefit—a new tradition we hope to continue. We [Eric Mast and I] were trying to come up with a cool theme and we thought how about we go for four days for the first time—and that's the theme—with a free day outside at PSU? Plus, it benefits a nonprofit organization made up of Portland teens that help music programs in Portland high schools.

How and why did you choose Music In The Schools? What's your connection to MITS?

I'm happy you asked this, because the honest truth is that we almost didn't do a SuperFest this year. Essentially, we chose MITS because MITS chose SuperFest as their big annual fundraiser! Eric and I met up and traded dozens of emails this summer with our friend Evan Neuhausen—who's pretty much our favorite Portland teenager ever. We met Evan at the first SuperFest, and he assisted Nilina Mason-Campbell at the last photo booth too. It was actually Nilina who suggested we meet with Evan to help promote SuperFest. And then it was Evan who suggested we join efforts on making SuperFest happen.

Why the new venues this year? What will these new locations enable you to do that hasn't been possible in the past?

The new venue choices were a decision made by MITS—since they are financing the whole fest and using their sponsors as well, we decided to go with venues with established relationships with MITS. Crystal Ballroom made sense because the space can accommodate any size of audience, plus they have a new sound system that will be in effect at SuperFest.

Backspace is the perfect size for all-local band dance parties, plus a lot of kids and their parents are familiar with it. And we special-requested Spencer of Operative to do sound which is a huge plus. We're renting subs and decorating the place to look and sound different too.

The free show (outside at PSU on SW Park and SW Montgomery) is a new idea that we are borrowing from our sister electronic summer fest Closer. It was important for us to have an all-inclusive night where anybody is free to come. We feel the three locations make the event feel much more like a festival too—there's no doubt now if there ever was.

---
Read the rest and find out who you should be excited about at this year's SuperFest 4 on OMN.