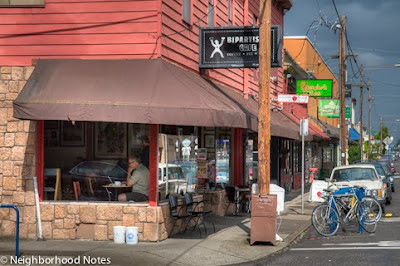 Lents neighbor and neighborhood activist Cora Potter has issued a challenge to her East Portland community hoping to invigorate the hyperlocal business economy in her area.

Do everything in your “power to only spend money east of SE/NE 60th Avenue on the weekends,” Potter says posting on Facebook.

Because “small businesses aren't going to see our neighborhood as a viable market until we start spending money in our neighborhood and up the $$$$$ that changes hands here instead of taking it to Williams or Hawthorne or Alberta or East Burnside and creating the illusion that the economic strength lives there alone,” she explains.

Potter goes on to say that she believes many other Portland neighborhoods have “the reputation [of] being able to support businesses—and the businesses are flocking there in multiples.”

“There are three places to buy hand-crafted ice cream in and around Williams and Alberta,” but “when I look at the actual population and market statistics, this doesn't make sense,” Potter explains. “There's not enough people there to support that many similar businesses. So, what's going on? They're getting business from outside the neighborhood, and I'm betting that some of it is East Portlanders making a trek to get something nice because we can't get it here.”

Both the Foster-Powell and Mt. Scott-Arleta districts “are on board with the east of 60th campaign,” Potter says, adding that “a few of my friends that live further north in Hazelwood and Parkrose are aware,” hoping that the word starts to spread there.

Blogger Jeff Lynott of Foster Powell PDX picked up the challenge by writing that while his community might “begrudge” other districts “for their vibrancy and access to shopping, groceries, and many of the amenities we lack, we also contribute to the disparity on some level.”

Admitting that Foster-Powell may not be in control of “environmental, economic or infrastructural elements that determine the shape, character and prosperity of our neighborhoods,” Lynott says, “we do have a choice in where we spend our money and which neighborhood businesses to support. And to that effect, it is no wonder that restaurants thrive on Division, but have little chance of expanding to the nearby environs of Foster Road. As long as we choose to hop in our cars to eat, shop and play, our own economy will lag and sputter.”

---
Find out why spending your money hyperlocally is important for your neighborhood and shared commercial corridor on Neighborhood Notes.