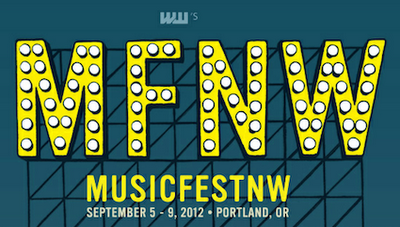 Funny how the years of the 2000s coincide with the number of years MusicfestNW has been in action—like they planned it or something. Well, in its 12th year, MFNW 2012 continues its reign as Portland's largest, completely citywide fest. And, apparently, it's also the nation's third largest indoor fest, according to Wikipedia.

While Wikipedia's numbers may be slightly out of date as they fluctuate each year, the 2012 fest's tally is currently at 172 bands at 17 venues from Wednesday, September 5th until Sunday the 9th. For all your ticketing needs, go here... otherwise, here's who not to miss at MFNW 2012:

After experiencing a nervous breakdown immediately prior to the release of their debut album, Manners, Passion Pit frontman Michael Angelakos was able to preserve and propel his band "higher and higher and higher." Yet, the singer used this experience and his continued struggle with bipolar disorder, stress and chronic fatigue as inspiration to create a record that's more than intimate—it's like eavesdropping, as bio writer Brent DiCrescenzo put it so well. The amazingly complex process of crafting that new album means:

"The songs on Gossamer carry anywhere from 60 to 200 instrumental tracks, according to Michael. If you ask Alex Aldi, Michael’s engineer, the number 80 to 120. (The maximum output on their version of ProTools is 120 tracks.) Whatever, it’s a fuckton."

Listen to it for yourself on "Take A Walk," the first single from Gossamer, and see how the Massachusetts five-piece recreates these sounds live as they kick off MFNW with LP on Wednesday night and follow that up with an encore performance on Thursday with The Hundred In the Hands, both at the Crystal:

Portland's proudest heavy rock exports Red Fang continue to top the local scene with their leaden, beer-soaked stoner metal—when they're around that is. Lately, it seems like they're either raging in Europe, supporting Mastodon or The Sword, or about to kick off another US jaunt with Black Tusk. We just ask them to come home long enough to record another album, film some more ridiculous music videos, and, hopefully, host another air guitar contest or some other such nonsense... here's in honor of bassist Aaron Beam's cat, "Hank Is Dead":

What began as a Gobble Gobble side project has become a known quantity and a burgeoning electro success in the year since Montreal's Purity Ring last played MFNW. The duo of beatmaker Corin Roddick and vocalist Megan James played Sasquatch in May, released their debut album, Shrines, on 4AD in July, and are now headlining their own set Ted's Berbati's Pan for MFNW. Check out the glitchy beauty of "Fineshrine":

For an avant-garde retro oddity that's contemporary, check out John Maus' set of late night synthpop at the Doug Fir. It'll be smart but danceable, a tad existential with a touch of disco, and dangerously intense from a man that's been releasing music since 1991, as well as playing keys for the likes of Panda Bear and Ariel Pink—if that gives you a little frame of reference. And to understand a little more, listen to "Head for the Country" from Maus' 2011 album We Must Become the Pitiless Censors of Ourselves: