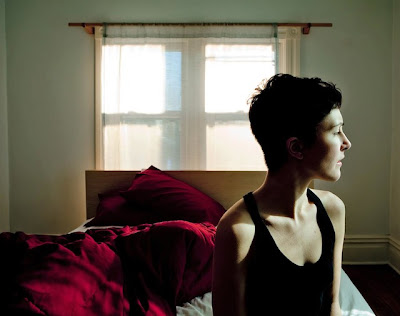 The last time Poliça (pronounced po-lisa) played Portland, it was to a packed house at Bunk Bar just days after the Valentine's Day release of their debut record, Give You The Ghost. It was also one of the first gigs the Minneapolis-based act had played outside of the Midwest.

Since, the electro-R&B four-piece lead by sultry-smooth singer Channy Leaneagh has played and wowed big fest stages at Sasquatch!, SXSW, and, most recently, Osheaga and Lollapalooza. And as the band continues their second run around the States, they'll hit a much larger Portland venue, the Wonder Ballroom, on Saturday, August 18th before wrapping it all up at Austin City Limits in October and then following that with dates across Western Europe in November.

Born as a studio project between Leaneagh and producer Ryan Olson (of GAYNGS fame), Give You The Ghost's cool, darkly danceable electronic vibe is created by smooth basslines and plenty of electronic manipulation, from Leaneagh's beautifully Auto-Tuned vocals to Olson's intricate production, like on "Lay Your Cards Out" (below), which features Bon Iver's Mike Noyce on vocals.

But, when it came to take the act out on the road, Olson decided to stay home. In his stead, Leaneagh enlisted bassist Chris Bierden and two drummers, Drew Christopherson and Ben Ivascu, all of whom also played on the record, to aptly recreate the album's elements live. And as they've made the aforementioned rounds, the live sound has evolved into an even tighter and cleaner package that really allows Leaneagh's true vocals to shine—not to mention it's just a joy to watch the pair of drummers deftly knocking out the layered beats.

And without Olson, this lineup is continuing to turn heads, like independent New York record label Mom + Pop Music. The band are set to re-release the full-length album Give You The Ghost on August 14th alongside a Dark Star Remix EP, which features Gardens & Villa and Exitmusic. Plus, they'll surely turn more when they appear on Jimmy Kimmel Live, their second late night TV performance, on August 22nd.

Listen to the Gardens & Villa mix of "The Maker":

Talking about touring highlights and not rushing the new music, OMN spoke to Poliça's Drew Christopherson via email in the week leading up to the show.

Tell me the significance behind the name Poliça.

We were intrigued by the idea of having a name with little to no previous associations to it. Sort of like naming a human or a pet. Poliça is actually a slight misspelling of a foreign word [Polish] meaning "policy," which seemed like an apt declaration of our purpose as a band. While we enjoy coming together as friends and creating music for the simple thrill of it, we also felt a sense of urgency and duty to make this band the best it could be, and that would be our policy. Also, it looks good in print.