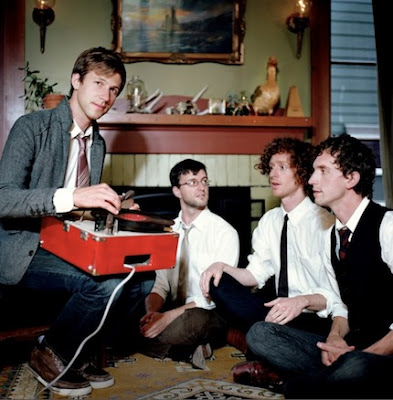 Synthesized from innumerable hours of Deeler sessions between four principal members, don't assume that the process for creating the second effort from ex-Menomena member Brent Knopf was any simpler because the physical number of people involved decreased.

"For the first Ramona Falls record [Intuit], I asked about 35 friends and family to spend about three hours each with me recording some ideas," Knopf says. "This time around, Ramona Falls actually is a four-piece and so I wanted to incorporate the band members as much as possible in the process."

Sonically, Brent Knopf's latest creation is as complicated as ever. Influenced by the dark, orchestral sounds of '80s, Prophet is informed by the music of Talk Talk and the songwriting of Depeche Mode's Martin Gore, plus a dash of Tears For Fears as well as the contemporary UK band Micachu and the Shapes.

In early 2011, Knopf walked away from his lauded and successful band of more than a decade to focus on this project. While he has definitely felt some insecurity since, Ramona Falls has allowed Knopf to feel "a little more okay exploring some more absurd sides of myself" as well as revive some songs "that didn't survive the Menomena process last time around."

That said, while Knopf's individual process may have a strong emphasis on collaboration, his approach to recording is undeniably involved.

Once again at the computer utilizing Deeler, a program of his own design, which was also used to compile Menomena records like Mines and Friend and Foe, Knopf and band mates Paul Alcott (drums), Matt Sheehy (guitar) and Dave Lowensohn (bass) recorded much of the album remotely, employing Dropbox to share music, constantly "adding ideas to the pile" from their respective locations.

Knopf describes Deeler as "a party in my mind, only it stores ideas on a computer," but more technically, it's a looping, compositional software that allows Knopf capture, organize, determine the best segments, and then piece together the pile of samples into a coherent, cohesive song.

---
Read the rest and watch a video interview with Brent Knopf on OMN.